Many fish instantly blow your mind. Roseline sharks can do that with their fascinating colors as well as their quick shark-like movements. They undoubtedly help keep the tank lively.

These sharks are appealing to the eyes and would look perfect in a public aquarium. They are easy to maintain, provided their water surroundings fulfill the condition.

The most important factor to keep in mind is free space since this fish gets big and requires a good amount of swimming space.

In this article, we’ll go over all you need to understand about taking care of Roseline Sharks, including their ideal environment, ideal diet, tank requirements, tank mates, behavior, etc. 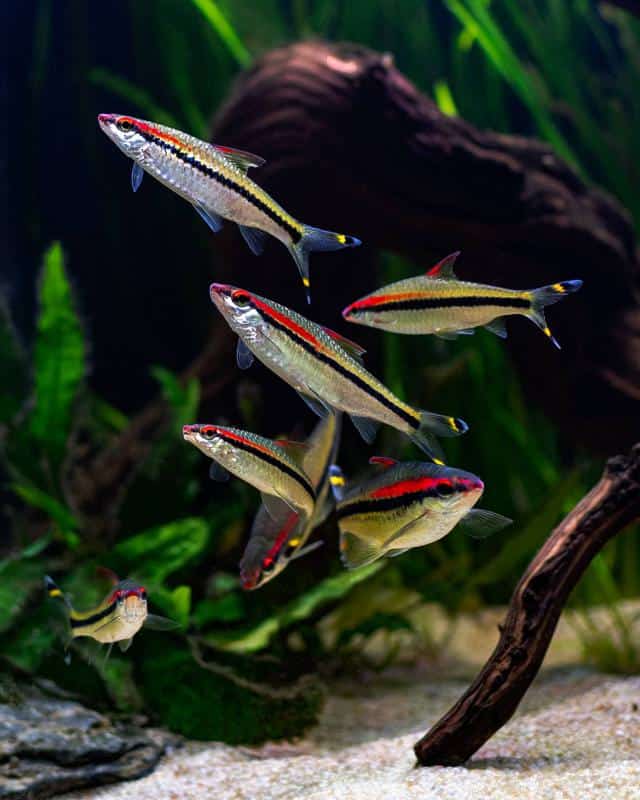 This species’ scientific term is Sahyadria denisonii, and they belong to the Cyprinidae class. Many well-known tank fish, like barbs, danios, and rasboras, are members of this class.

These freshwater species are native to India, and you may find them in fast-flowing river systems and channels. You may find this species living in colonies in the mountainous region known as the Western Ghats.

Roseline Sharks gained public interest as decorative fish after being brought from India during the late 1990s. Their population has decreased since that time.

Sadly, the fish is currently considered endangered because of their limited native population numbers and potential overexploitation in the marine sector.

To increase the population of Roseline Sharks, many initiatives are being taken to actively breed them in captivity. Despite it being tested all over the globe, the results have been inconsistent. The introduction of strict guidelines and industrialized breeding operations has increased breeding productivity.

You can easily get this fish in your local pet shop. The price of this fish can vary from $10 to $30 based on its size. The prices are probably going to go up if the population declines. A Roseline Shark can survive for at least five years in an enriching habitat that meets its requirements. 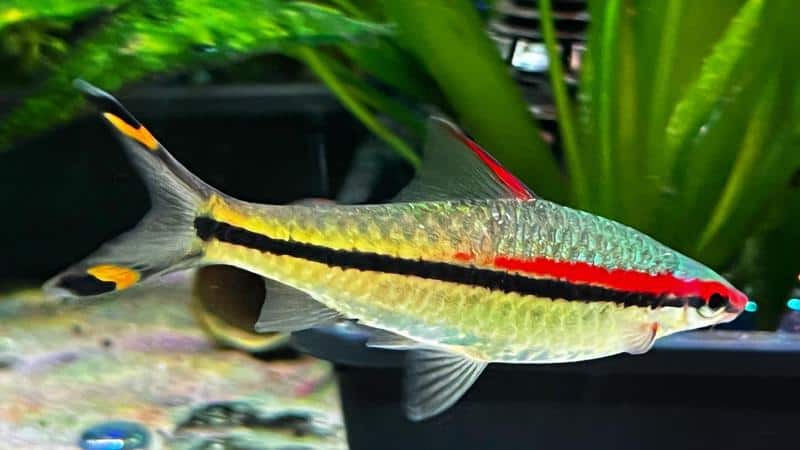 The Roseline sharks are freshwater fish that are well renowned for their vibrant colors. They come in a wide range of colors, but Silver is mostly what they are made of. They could also be found in gold and yellow color. They have a torpedo-shaped body, which looks fascinating.

They have a black lateral stripe in the middle of their bodies, which goes all the way to their tail. There’s also a red line right above the black stripe. They have an emerald green color on their heads. You can not differentiate males and females based on their appearance. However, females are a bit longer than males.

How Big Does a Roseline Shark Get? 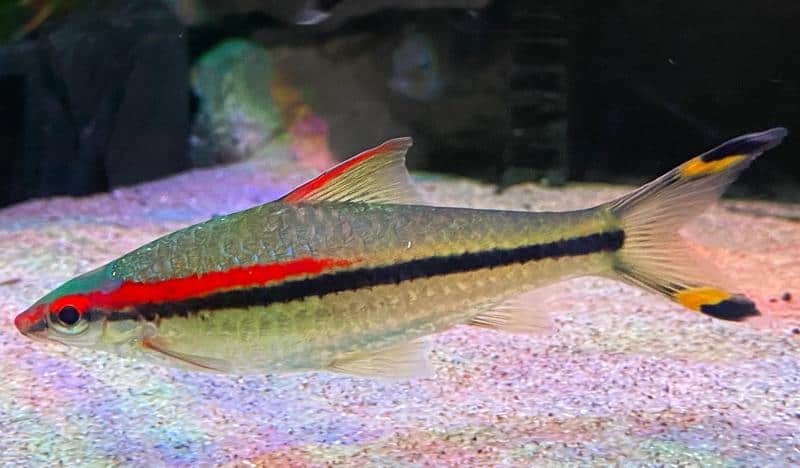 Denison Barbs come in different lengths; however, the standard Roseline shark is about 6 inches long when completely mature. Their length allows a clear view of their color patterns, which look stunning when they swim in groups.

Female Roseline barbs would grow somewhat bigger and broader than males. The length and torpedo-like body of the Roseline Shark is the reason that they are excellent swimmers.

It also implies that you would require a large tank to maintain these species. They grow up really fast, so if you’re planning on getting a smaller tank, you might soon be replacing it with a bigger one.

What Are the Tank Size Requirements for Roseline Fish? 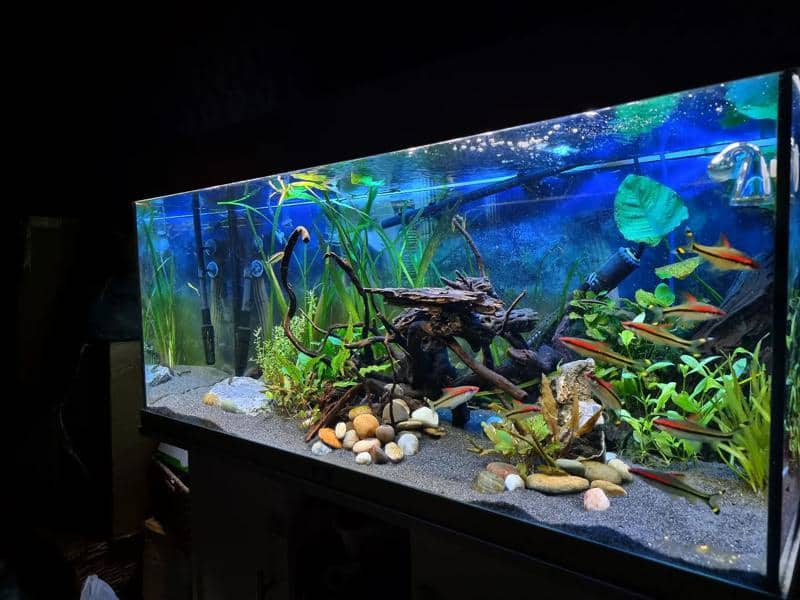 Roseline Sharks are outgoing and energetic species that need a large tank with room for additional fish and lots of room to swim around. Six Roseline Sharks can be housed in an aquarium that is no smaller than 55 gallons and 4 feet long. They would need more room as they grow bigger.

In their natural habitat, Roseline sharks are migrating species that move in shoals and could contain hundreds of many other species. Due to this, Roseline Sharks that are kept in captivity do better in big groups with lots of room for movement.

Usually, every Roseline Shark introduced to an aquarium would need 6–10 gallons of tank area to swim freely. Roseline Sharks may hurt themselves in confined spaces by slamming into the aquarium glass or exhibit unusually violent behavior.

Furthermore, it’s necessary to note that Roseline Sharks must have a tight tank cover because they have a tendency to dive and could quickly remove a loose lid cover and jump outside the tank.

Can Roseline Sharks Eat Other Fish?

Roseline sharks are very friendly around other species and their companion species. In the most extreme scenario, they could attack the eyes or fins of a smaller species such as Betta or Guppy that flutters too enticingly. However, the majority of fish of that size will behave the same way.

These so-called “sharks” possess tiny jaws and won’t attack anyone bigger than saltwater shrimp or young guppies. Although they occasionally fight among themselves, particularly the males. The fights usually never result in serious injury.

They could spook little fish because of their appearance and speed. They could be a good fit for medium-sized fish such as Black Skirt Tetras, but you should avoid housing them with smaller fish.

What Do Roseline Sharks Eat?

The Roseline Shark may preserve its beautiful, brightly colored markings by eating fresh or frozen items rich in carotene or fat-soluble powders. An organic or frozen diet could have brine shrimp, bloodworms, aquatic plants, or tiny bits of green leaves and veggies such as lettuce or cucumber.

Roseline Sharks may achieve their best quality of life by eating different types of foods. Feed your Roseline shark twice, and the quantity should be limited so that they can eat in a few minutes. These species love when you put their feed right in the middle of the tank.

How Many Roseline Sharks Should You Have? 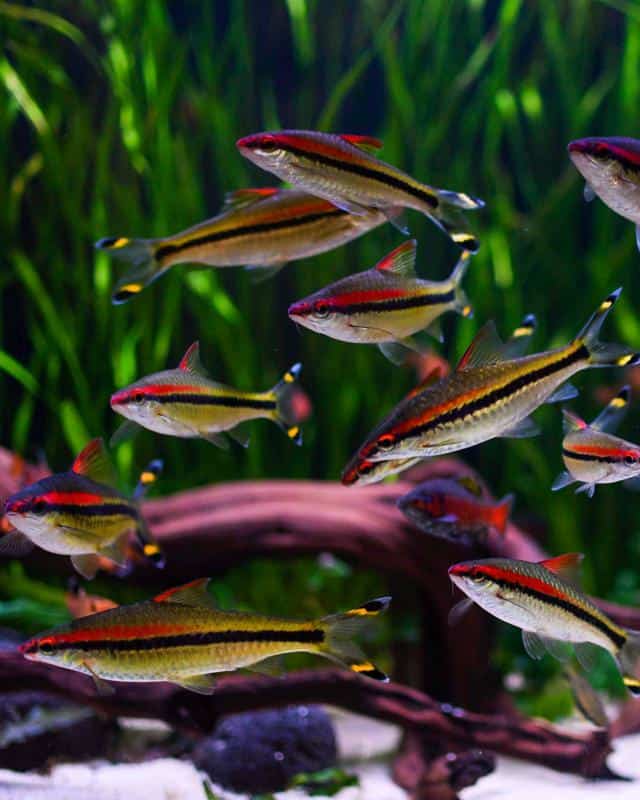 In general, Roseline Sharks are always happy when housed with a minimum of 6 of their own kind. A bigger group of Roseline Sharks—12 or more—are recommended, provided your tank’s capacity allows more fish to have a wide active swimming area. These species require social connection to maintain good health since they can not thrive if you keep less than 6 fish or just 1.

Denison’s barbs grow bigger and loud, not violent. Therefore, as the population grows, the violence declines, and the group becomes more diverse and less hostile. Breeding is also easy and more likely to turn successful when the tank has more than 15 roselines. Even if you aren’t planning on breeding them, you can get the idea of how peaceful their environment will get.

No, they are peaceful, energetic fish who enjoy being around their own species. In their natural habitat, Roseline sharks gather in groups called schools. This species requires a lot of socialization. If you’re planning on getting Roselines, then you should note down these things in order to prevent serious problems.

A single Roseline shark has a strong tendency for hostility. Regardless of how big your aquarium is, these species may start conflicts over food supplies and the swimming area. The shoal encourages positive behavior.

You could still come across some occasional destructive encounters despite maintaining a proper shoal. Male Roselines often display dominance rituals among the colony. You can notice the peace turning into sparring within seconds. The fights last only a few seconds with fewer injuries. However, as a new fish parent, you should be aware of everything.

A balanced school might potentially cause trouble if you don’t pay attention to your aquarium setup. Roseline sharks that are overcrowded would become hostile against other species in the tank. In addition, they will be stressed out from being crowded inside the tank like sardines.

What Are the Best Tank Mates for Roseline Sharks? 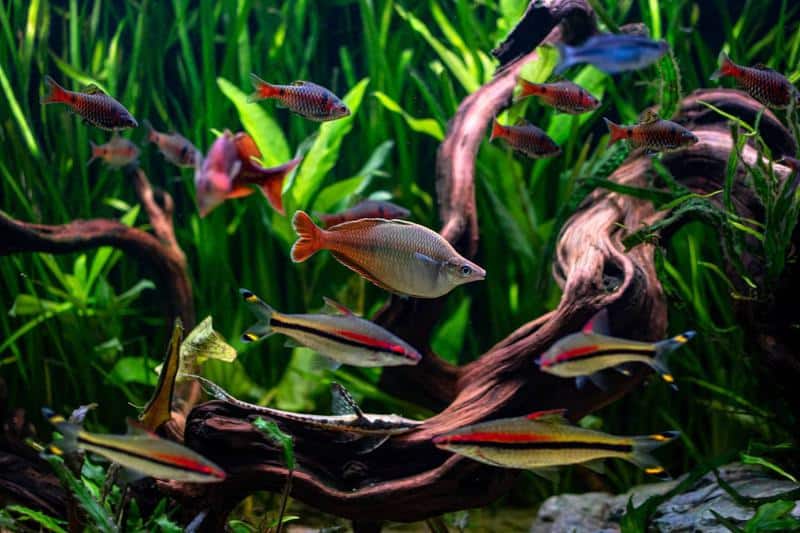 The best mates for Roselines are medium-sized, non-violent fish like Betta fish, Cherry Barbs, Cyprinid Barbs, Gouramis, Cichlids, Catfish, Plecostomus, tiny Stingrays, big Tetra fish, or Rainbowfish. Violent or defensive species, like Red Tail Sharks, do not get along with Roseline Sharks. These species have the ability to injure fish using their trailing fins, like Betas and Guppies.

While selecting Cichlids, you should understand that Roseline Sharks are large yet extremely thin. Some of the predator fish may be enticed to attempt devouring one.

The Roseline Shark’s frantic movement might cause stress to little sensitive fish like Nanos. These species may eat baby shrimp species, including the Dwarf Shrimp. They are also likely to disturb Discus fish and could end up eating them if they engage in a fight.

What Is the Average Lifespan of Roseline Fish?

Denison Barbs can live in confinement for around 5 years if fed properly and housed in a clean environment.

Although domesticated fish are subject to a certain amount of luck, the way you treat them could have a huge influence on how long they live. If you fail to not give excellent care, your Roseline Shark may get sick and have a considerably shorter life.

What Are the Tank Water Conditions for Roseline Fish?

Roselines are strong species that can survive in temperatures ranging from 60 to 77°F (15.5 to 25°C). However, focus on maintaining your tank water in the advised range to keep your fish as healthy as possible.

They require balanced pH; however, slightly acidic water could be accepted. Any value between 6.6-7.8 will always work well. Additionally, your water hardness levels provide you with a lot of flexibility between 5 and 25 DH. These water parameters are suitable for nearly any vibrant freshwater tank.

The challenging part comes when you examine the quality of your water. Ammonia and nitrites are toxic to Roseline sharks. Furthermore, even though roselines may withstand nitrate concentrations of up to 5 ppm, you shouldn’t exceed 10 ppm. They will begin to lose their pigment as a result of that.

Can You Breed Roselines at A Home Aquarium?

It is impossible to effectively breed Roseline sharks inside a domestic tank. The species you purchase from fish shops or online stores are usually bred commercially using hormones to promote reproduction.

In order to avoid stressing your pet and increasing the likelihood of failure, experts advise avoiding attempting to reproduce the species in your aquarium.

Are Roseline Sharks Prone to Any Diseases?

The water’s overall quality has a high impact on this fish. They are adapted to rich and clean water clarity because of their native home in the Western Ghats. Therefore, they may develop a variety of illnesses from contaminated aquarium water.

Although there are no identified species-specific illnesses that could harm them, they are vulnerable to numerous infections that infect other freshwater species. These diseases could involve Cotton Mouth Disorder, Fish Ich, Swim Bladder Disorder, Constipation, and lots of micro bacterial and fungal illnesses.

Freshwater fish are widely accessible for tanks in households, making it challenging for some fish to gain popularity. Roseline Sharks are easily recognized due to their striking color, texture, and engaged social life.

It is quite easy to create a great atmosphere, and if you manage to keep it up, the maintenance is effortless. The main challenge is to have the right-sized tank spacious for fish to swim freely. These species may grow around 6 inches long and require lots of swimming room. They thrive best in tanks with other medium-sized communal fish.

If you’re searching for fish that won’t require a lot of care and will brighten up your aquarium, then Roseline Sharks are a great option.