Because of their beauty and personality, bettas are some of the most well-loved pets in the aquarium hobby.

Plus, with all the different Betta variants out there, you can surely find something that will strike your fancy. 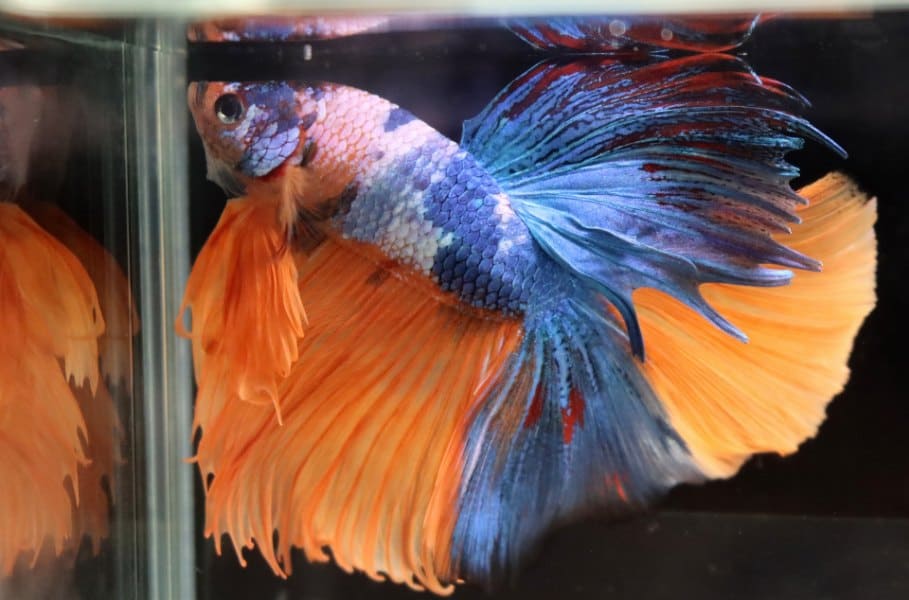 One of the newer variants that are taking the aquarist hobby by storm is called the koi betta, which has unique characteristics that certainly add interest to any aquarium.

But are these fish the same as regular bettas? How do you care for them? And which type of koi bettas should you get? In this article, we’ll talk about koi bettas and all the essential information you have to know to raise one properly.

What Are Koi Bettas?

The Koi betta fish is a new arrival to the world of aquariums. Because of its striking appearance and novelty, many aquarists are starting to take notice of this fish.

But what exactly are koi bettas?

Koi bettas are a Betta variant that was developed through selective breeding. As the name implies, koi bettas were bred to resemble koi carp, which are popular ornamental fish in Japan.

To achieve this desired look, bettas that were born with this specific coloration are repeatedly bred with other Betta variants that display similar color patterns to the koi carp.

Like regular Bettas, this Betta variant is also a freshwater fish from the Gourami family. They’re called labyrinth fishes because they use their “labyrinth organ” to breathe oxygen directly from the surface, inhaling air, unlike other common fishes that live from their gills.

Bettas are native to rice fields and stagnant marshes in Southeast Asian nations like Thailand and Vietnam. They like warmer water because of their tropical origins, and they like to live in waters with a lot of vegetation.

To start raising these delightful little fishes, you should know everything you can about their care requirements, which we’ll discuss in this section.

Koi betta fish is a specific variety selectively bred to exhibit multiple vivid colors, just like koi. Koi fishes have been bred over the years to exhibit distinct colorations and patterns, often combining three or more colors. As a result, this breed is also called marble betta.

In terms of size, koi bettas have bodies that are roughly 2.5 inches long on average. Their flowing fins can reach an overall length of three inches. Females are typically smaller than males, and they also have a more rounded and plumper.

There are different ways you can tell a male and female koi betta fish: the following.

Male Koi bettas should ideally be kept alone since, like other male Bettas, they can be quite aggressive.

They often do well with invertebrates like bamboo shrimp and snails that are too big for them to eat.

Occasionally, you can keep mild-tempered males with other fish. The ideal tankmate must be peaceful, short-finned, and fast-swimming. They also shouldn’t be too similar in appearance to the koi betta to avoid territorial disputes.

Except during breeding, male Koi bettas should not be housed with females as they can harm or even kill the latter.

Female koi bettas can be kept in a community tank as long as the other fish are not too aggressive or large enough to eat them. You can also set up a Betta sorority, also known as all-female betta groups, which can house up to six individuals.

Koi Bettas can live as long as other Betta variants, which averages around 2-3 years.

There have also been recorded instances of betta fish reaching 7.5 to 10 years. If your Betta has good genetics and is living in a clean, healthy environment, the chances of living past 5 years become higher.

Like regular bettas, koi variants do well with a minimum tank size of 5 gallons, and ideally 10 gallons.

While it’s true that you can keep bettas in aquariums as small as 3 gallons, it’s generally not advisable. These nano aquariums are much more challenging to take care of because water quality fluctuations can hit them hard.

Additionally, if koi bettas can technically survive in cramped spaces, they won’t be able to thrive and reach their full potential.

One of the most important considerations when taking care of koi betta fish is water quality. While bettas are hardy fish, they are more prone to diseases and stress if the water is dirty and doesn’t have the proper parameters to survive.

It would help if you had the following relevant water quality measurements in a koi betta tank.

While Bettas will typically eat whatever they can fit in their little mouths, they’re actually avid hunters and thrive on high-protein food.

You can fulfill this carnivorous need by feeding them high-quality pellets or flakes as their primary food. You can also give your Koi betta fish live foods or thawed frozen foods like bloodworms, daphnia, and brine shrimp.

To keep your betta koi healthy, it’s important to give them commercial food as the mainstay of their diet. This way, you can be sure they’re getting all the nutrients they need. Fruits and vegetables won’t improve their health, unlike other common aquarium fish such as goldfish.

Treats are safe in moderation, but Koi bettas should be fed primarily with protein-based diets.

Koi betta fish can be successfully bred in a 10-gallon aquarium by any hobbyist. Individuals under a year old are best for breeding since they are still incredibly fertile.

Before breeding, the breeding couple needs to be conditioned. The water temperature should also be at least 27°C, with the pH around 7.0. The eggs will be stored in a bubble nest that the male betta will construct.

Since the male can become hostile during the breeding season, make sure you prepare a secure hiding place for the female.

Now that you know what koi bettas are and the basics of caring for them, you should choose the suitable variety of koi bettas for you! There are tons to choose from, but here are the most popular choices across the hobby!

Plakat Koi Bettas are simply Plakats with Koi coloration. They’re arguably the most popular type of Koi Betta since many people love how they look. Their vibrant colors and unique patterns can certainly make your tank pop.

Candy koi bettas are typically red, black, white, and yellow/orange. They appeal to many aquarists in the hobby because of their lovely color combinations.

The “candy” in their name was given because their vivid and unnatural colors resemble the colors you’d expect from candies.

Male Koi Galaxy Bettas have distinctive colors and big blue patches on their bodies. Scales that are often vivid and iridescent blue to turquoise in coloration.

The males of any koi betta type will have more vibrant colors and longer ventral fins, and the same is true for galaxy koi bettas.

The copper koi betta is a name given to koi bettas with copper, fancy, gold, and orange coloration. They have an iridescence to their scales, making their colors more striking under direct light.

The Tangerine Koi Betta can be found in many hues and designs. One fish may occasionally exhibit five or more colors, making them among the most exquisitely colored bettas now available.

The nemo koi betta is a very colorful fish. The color combinations of this fish’s specimens vary, and they frequently show five or more colors on a single fish. These colors often come in orange, black, white, and other color variations.

Although every betta is different and one of a kind, every specimen of this species is vividly colored.

Tiger koi bettas are predominantly characterized by lines of light-on-dark or dark-or-light scales. This means that, for example, the betta might have a yellow body with black or blue stripes or a blue body with yellow or orange stripes.

It’s also important to note that the stripes don’t have to be that well-defined in a tiger koi betta.

All You Need to Know About Koi Bettas

As you can see, koi bettas are among the most popular betta fish varieties because of their unique and exciting coloration.

While they don’t differ much from regular bettas, it’s still important to know what koi bettas are, how to classify them, how to differentiate between males and females, and the various types available to you.

This article has provided you with all the necessary information to pick and raise the right koi betta variety for you. Now all you need to do is a trip to the fish store!