Symmetrical color changes are the first things you want to look out for when you are concerned about the color changes in your goldfish.

Goldfish are a unique species that were conceived through thousands of years of selective breeding. This has led to goldfish having many dormant genes, including color genes, that regularly affect how the fish looks.

Simply put, if your goldfish is gradually turning white with a well-distributed symmetrical pattern, you have nothing to worry about. The goldfish’s genetics causes it, and it is completely normal.

However, a goldfish turning white is not always a good sign. Even though the species is a resilient one, goldfish are quite sensitive to environmental changes, especially changes & disturbances that can induce stress. Illnesses like fungal infections are severe causes of goldfish turning white, but the most common causes are poor water parameters.

You may be worried about your fish when it starts turning from bright gold to white, even more so when it happens suddenly. Do not worry since this is a common concern and the causes are typically benign. However, some can be severe, and you will want to read on to know what to do in such cases.

Is It Bad If My Goldfish Turns White?

Keep an eye on how the color change is distributed on the goldfish if the goldfish turns to white in a symmetrical distribution; then it is not a bad sign. However, irregular white patches, spots, and color changes point to an underlying health/environmental problem.

Goldfish became popular in China in the 9th Century. They have a beautiful history tied into Buddhist traditions that saw them as a means of self-purification.

Goldfish were later domesticated and underwent selective breeding for their color in China about a thousand years ago. This led to a natural genetic mutation that produced the beloved golden color (sometimes seen as yellow-orange).

The beauty of the golden variety became so popular that other colored goldfish, like the silver one, became rare breeds. Recessive genes still lurk in the goldfish’s DNA which is why it is natural and common to see your goldfish turn color as it matures. This natural change is distributed in noticeable patterns, usually to the extremities of the fins and tail.

On the other hand, irregular white color changes are a norm in goldfish that are stressed, ill, or live in a bad environment. The first thing you ever want to do when you notice the goldfish changing color is to take a look at the water parameters; the culprit may be lying there.

Why Is My Goldfish Turning White? And What to Do

Now that you know the story behind why goldfish change colors, let us dive into the reasons why your particular fish is experiencing this symptom. 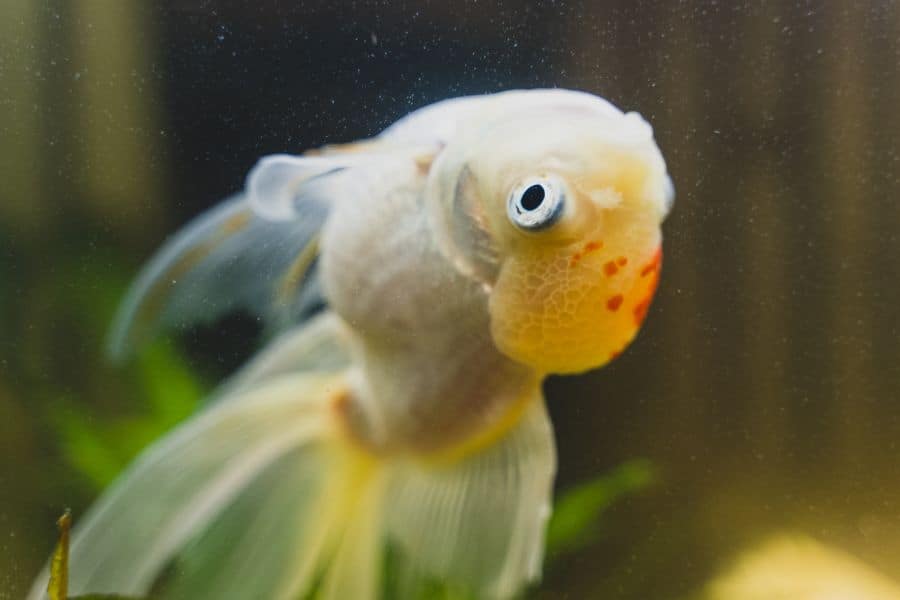 This is the most dreaded cause. You have spent your time becoming a skilled hobbyist, but now you have to face the bad side of becoming a fish owner, seeing your goldfish in pain.

The goldfish turning white is not linked to any particular type of disease. It is a symptom associated with a wide range of illnesses, and the sickness can only be identified through a combination of other symptoms.

If your goldfish is losing color but also lacks appetite, is sluggish, and losing weight, then this may be a tale tell sign of an infection. Fungal, bacterial, and parasitic infections are the main causes. Typical diseases are known to cause goldfish to turn white include the ich and Malawi bloat.

Keep an eye on how the white color changes look like. Fatal illnesses tend to cause deadly white erosions due to conditions like dropsy. Take your pet to an experienced professional to get a medical opinion on how to proceed with treatment.

As a good practice, you should always quarantine the sick fish. Infections spread quickly in aquariums, and you do not want your whole stock to be a victim.

Author Note: White color changes can also be caused by irritation due to physical trauma or attack.

Water quality is something you must put front and center when you own a fish. It is the cause of many fish problems, and ensuring you have the most optimal conditions at any given time will save you lots of headaches.

Poor pH levels are the most common water quality issue that can cause the goldfish to turn white. Discoloration is also common in water that is filled with lots of chlorine.

As you may know, tap water in most houses comes from the main distribution system, which means it is filled with chlorine. Arm yourself with a test kit to ensure levels of chlorine, pH, ammonia, nitrites, and nitrates are at the recommended levels. If the water quality is up to par, then this is not why your fish is turning white.

Avoid overfeeding the fish to keep the water quality great. Goldfish are known for their friendly and easygoing nature, which makes you want to pamper them. You will be forgiven for wanting to feed them every time they ask for food, but this will contaminate the water and stress them in the long run.

Apart from the quality of the water, you need to pay attention to the temperature and oxygen levels in the tank. The recommended water temperature for keeping goldfish is between 50-60 degrees Fahrenheit. Colder temperatures usually lead to more colors, while hotter temperatures can cause the fish to be less intensely colored.

Low oxygen levels are fatal. Goldfish thrive in aquariums with about 5-6 PPM of dissolved water, but you can get away with 8 PPM. You will know low oxygen is an issue if you have been testing the water weekly, a good practice for any hobbyist. If the goldfish is struggling to breathe and looks lethargic, then oxygen may be the cause.

The fastest fix for this is to perform a 60% water change and always keep an eye on these parameters. If nothing changes, then you can proceed to look at other causes.

Ultraviolet light is the bread and butter of many animals’ colors. Goldfish pigments respond to UV light intensities and shift color accordingly.

The goldfish has two pigment cells: melanocyte pigments for dark pigmentation and chromatophores for coloration. These cells have various colors depending on the species, but they all produce paler (whitish) colors when they don’t get enough UV light.

The reason why this is not the main cause of goldfish turning white is that the fish also get some coloration nutrients from their food. Meaning you may have a fish that doesn’t see much light but yet retains its vibrant goldish color.

Goldfish thrive in an environment that has about 12 hours of sunlight or artificial lighting that provides ultraviolet light. This is not only good for its coloration but also its health, vibrancy, and low-stress levels.

A healthy fish diet comprises lots of vitamin meals and foods that are naturally rich in pigmentation nutrients called carotenoids. Shrimp, krill, spinach, carrot, and spirulina algae are some of the best examples of foods that help maintain the goldfish’s color.

A poor diet deprives the fish of carotenoids which eventually contributes to the goldfish turning white, especially when combined with other factors like low UV light.

Packaged fish foods rich in canthaxanthin are good for dealing with this cause. Canthaxanthin is an artificially added pigment in fish foods that enhances the goldfish’s color and can help reverse discoloration due to improper diet. 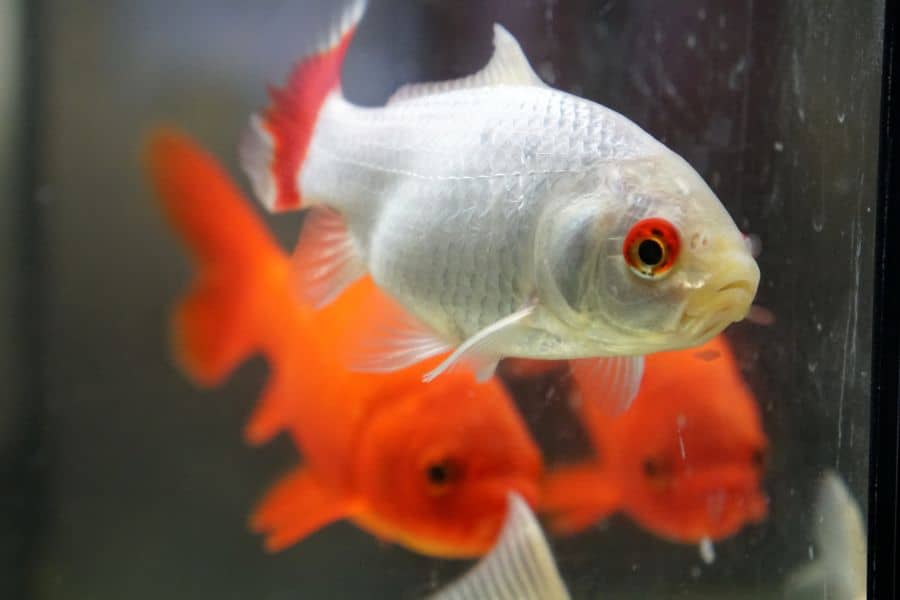 As seen earlier, goldfish are a man-made species that still have lots of recessive colors in their DNA. It is hard to know what color your goldfish will turn into throughout its life unless you have access to the parent stock.

Dominant colors in the parent stock will tend to be more stable. It is, therefore, a good idea to speak to an expert about the stock’s color life cycle to know which color goldfish you may prefer. You should also know of any common recessive colors that may appear during the goldfish’s lifespan.

Your goldfish is turning white because of genetics when you notice that the natural colors move towards the lower ends of fins, especially the dorsal fins. Sadly, it is a natural process over which we have no control. 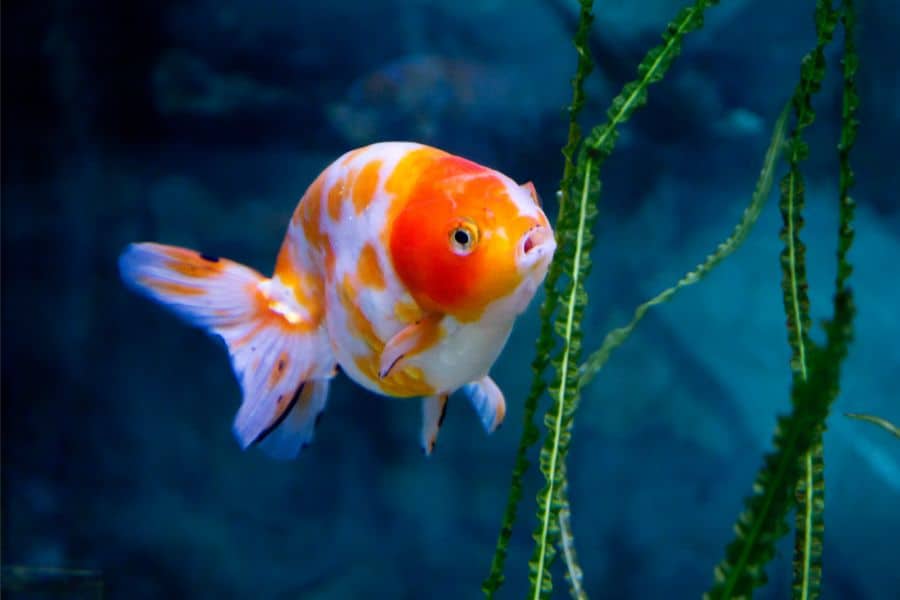 Common color changes as the goldfish matures include a shift from bronze to orange in the early years and orange to white in the later stages of the fish’s life. Maturing goldfish may also turn from white to orange, black to orange, or orange to black.

Some goldfish stop the color change after the first few years (usually two years), but others continue changing for more than ten years.

Since goldfish can live up to 15 years in most cases, you may wonder how they evolve throughout that time to change colors. Well, the answer is in the chromatophores.

Every fish has a certain number of chromatophores which remain mostly fixed throughout the fish’s life. However, as the fish grows, so do the chromatophores, making them cover wider areas of the goldfish’s skin.

As the chromatophores get stretched further and further, the color of the fish starts to turn paler and paler. Hence, the goldfish turns white when it gets older.

Related: Why Is My Betta Fish Turning White?

The color of the goldfish is among its many attractive qualities that pull people into the fishkeeping hobby. It is important to keep fish coloration as a factor when getting any fish. It is a factor you have little control over, but the good news is you will rarely have to worry about it.

Start by learning how the goldfish’s color depends on its pigments and how the pigments are affected by environmental changes. Common things that change the pigment coloration include the water quality and temperature.