While many people are familiar with the green moray, moray eels come in a range of sizes, colors, and patterns.

The dark green to brown color of the green moray eel comes from a yellowish mucous that covers its blue skin to provide protection from parasites and infectious bacteria. Additionally, they are often camouflaged to hide in the reef from unsuspecting prey. The eel has tube-like nostrils and uses its sense of smell to locate its prey.

Part of their vicious reputation may come from the fact that they habitually open and close their mouths, which shows off their sharp teeth. Although this behavior may appear threatening, the eel is actually taking in water to breathe. The water passes over the gills and exits through vent-like openings at the back of the head.

They have a secondary set or toothed jaws in their throat called pharyngeal jaws, which are thrust forward to grab and drag prey down through their digestive system. They are the only known creature to use pharyngeal jaws to grab and hold prey.

Moray Eels are carnivorous (eating only meat). Their diet consists of octopus, fish, mollusks and crustaceans. They hunt mainly at night and use their keen sense of smell which makes up for their poor eyesight. This means that weakened or dead animals are its favored food because they are easier to detect. 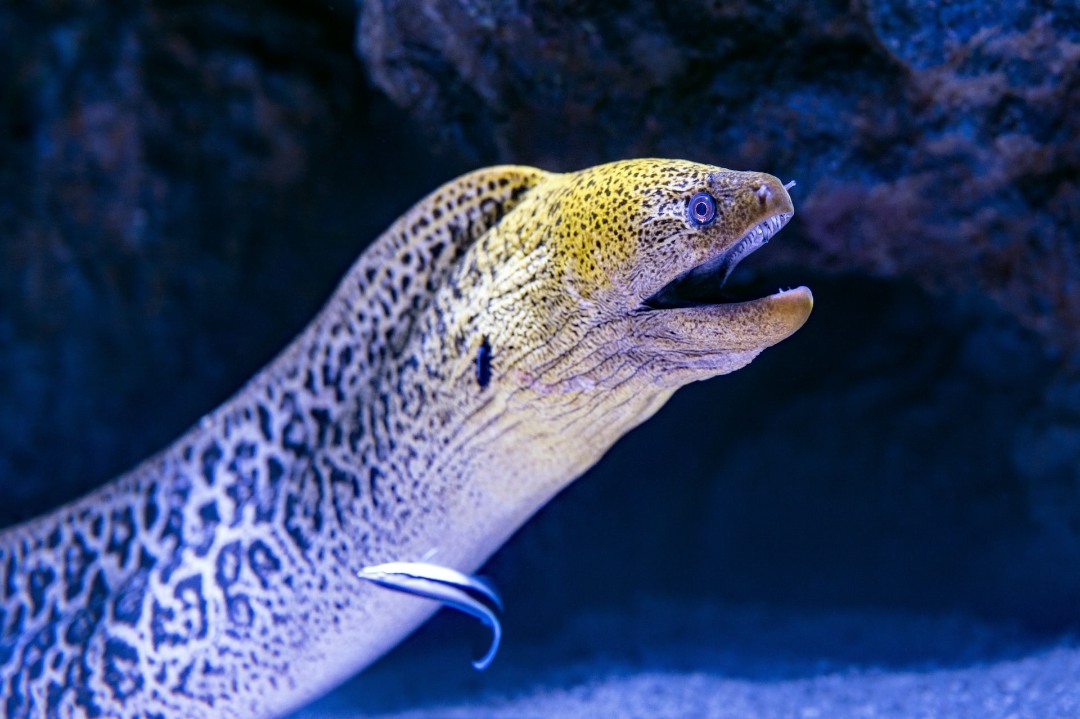 Green Morays average about 6 feet and roughly 30 pounds. There is no set mating season for the Moray Eel. They tend to take part in it when they have enough food and habitat. Moray eels, like all true eels, are oviparous (egg laying). Warmer water temperatures also increase the chances of successful mating. The females will find a place to deposit eggs into the water where they will be well hidden. She will release an odor as she does this and that enables males to come along and deposit sperm as well. It can take from 30 to 45 days for the young to emerge.

If the temperature of the water heats up they will come out of the eggs in fewer days. The young instinctively know how to care for themselves from the moment that they emerge from the eggs. A very high percentage of them will end up being prey for various forms of aquatic life so they won’t reach the age of maturity. The Moray Eel is ready to mate around 3 years of age.

The main predators of moray eels are other moray eels but also large groupers, barracudas and people. In truth this represents very few predators, which explains why they have the confidence to live in burrows or crevices in the reef from which swift flight maybe difficult.