Being tiny, peaceful and colorful, Cherry Shrimps are fast becoming a popular aquarium pet. Aside from being an ornamental shrimp that greatly improves the aesthetic beauty of your tank, this crustacean (being an algae-eater) is also used to naturally control the growth of unwanted algae.

In my years of being an aquarist, what I have observed with cherry shrimp is their difference in stocking density. Commonly, the quantity of cherry shrimp in a tank is kept to a minimum.

On the other hand, with their non-aggressive behavior making them tolerant to high stocking densities, some aquarists have loaded up their tanks with a lot of cherry shrimps. 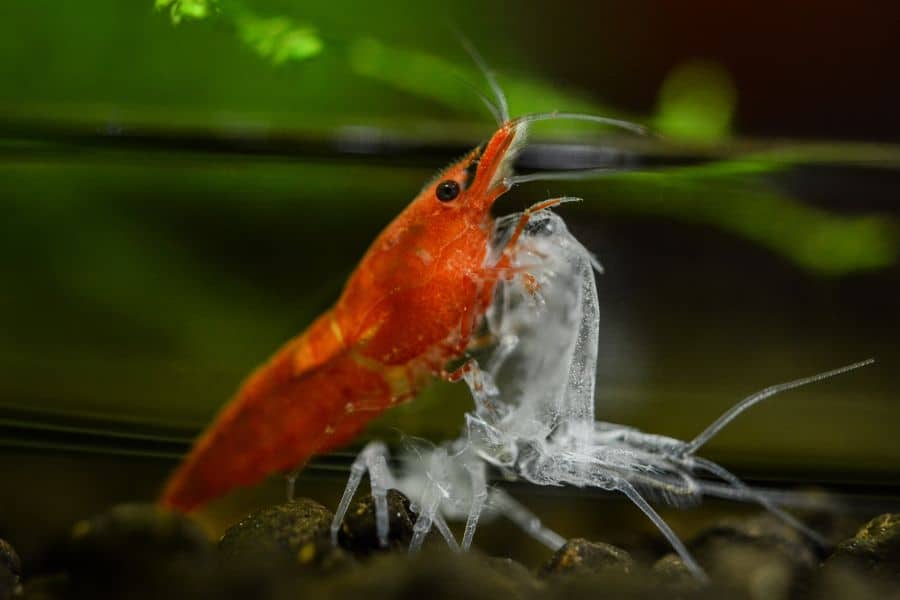 But what should be the ideal stocking density for this rising star in the world of aquarium keeping?

Join us in this article to learn more about cherry shrimp and see how scientists determined their ideal stocking density which has also facilitated optimum growth, development and its overall well-being.

Cherry shrimps (Neocaridina davidi) are ornamental freshwater species under the Atyidae family of shrimps. Originating from Taiwan, this decopod (or ten-footed organisms) is relatively small with a maximum recorded size of only 4 cm (1.6 inches) long.

Anatomically, cherry shrimps are similar to their marine cousins – the saltwater shrimps.

Located under the head, they have 5 pairs of walking legs known as periopods. If you have a 20-20 vision or with the use of a magnifying glass, you can personally examine and observe their periopods.

Once magnified, focus on the first 2 pairs of periopods. You will see that these pairs of legs are not really used for walking. Rather, it is a modified leg that is turned into a claw that is primarily used for grabbing food.

Cherry shrimps are opportunistic feeders. Classified as an omnivore (eats both plants and animal remains), they literally eat anything found in the substrate like algae and leftover feeds.

Aside from periopods, cherry shrimp also have 5 pairs of swimming limbs called pleopods. This is found directly under their belly. You should be familiar with pleopods especially if you are planning to breed them since this is the part where the eggs are held in females.

While the life expectancy of cherry shrimp can last up to 2 years, it will only take 30 days for them to be sexually mature.

Cherry shrimps reproduce sexually. A single female cherry shrimp can carry up to 60 eggs under her body. She will incubate it for 16 to 19 days until the eggs are hatched and the baby shrimps are released alive.

The size of baby cherry shrimp ranges from 1 – 2mm. In a process called molting, they grow by shedding their exoskeleton then feed on it to reabsorb the nutrients stored in the abandoned shell. The molting stage is considered crucial since their soft body is totally exposed.

Fun fact: Did you know that the beak of cherry shrimps is square-shaped as compared to the pointed appearance in saltwater shrimps?

It is hard to determine the sex if the cherry shrimp is still juvenile. The obvious anatomical differences will only come out when they reach adulthood and sexual maturity.

Color Variation as a Result of Breeding

Wild cherry shrimps are naturally colored greenish-brown and transparent. However, with selective breeding, cherry shrimps that are available in the market now come in different colors. Each color variation has led to the development of a new species breed name, as follows:

Asking a fellow aquarist as to the ideal stocking density of cherry shrimp is good. But it is better if it is backed up with scientific study.

Based on the experiment conducted by Vasquez et al. (2017), they found out that the best stocking density for cherry shrimp is 2.5 (≈3) shrimps per liter of water.

This conclusion was derived from their 90-day experiment using this research design:

They further discovered that among the parameters tested in their study, it was the weight gained that showed significant results. Among the 3 different densities tested, it was the stocking density of 2.5 shrimps per liter that gained the most weight (Please see figure below, as photo grabbed from the abovementioned study).

Mortality rate showed no significant difference amongst densities since all of them performed well with a range from 87 – 93% survival rate. Sex grouping (monosex and mixed) was not affected by density since results among sex segregation were all similar and consistent.

Now that you know the ideal stocking density of cherry shrimp, it doesn’t mean that you just leave them in the tank.

While they can survive a range of water environments, cherry shrimp is best kept in waters with the following conditions:

Since cherry shrimps are tropical species, they can tolerate living in temperatures ranging from 14 – 30OC (57 – 86OF). But if possible, maintain it at room temperature (22OC or 72OF).

Cherry shrimp loves neutral to slightly alkaline waters with pH ranging from 6.5 to 8.0. They are not attuned to acidic waters.

In case your pH drops, the calcium carbonate that composes their shell will react to the acidic water and become soft. This is totally different from molting since the reaction from acidic water will not totally shed out their shell, thereby stunting their growth.

Watch out For Copper

Adding nutrients is okay. But you have to watch out for copper since cherry shrimps hate them. Be aware that copper can be found in feeds and nutritional supplements.

In the event that copper levels increase, it will lead to various health problems to your cherry shrimp like disruption in the normal respiration process, inhibits sexual reproduction which leads to decrease in fertility and affects their immune system.

Cherry shrimp loves to roam around open water. However, there are instances that they need hiding places, especially during molting and breeding. This is important if other tank residents are around like fish.

Particularly during molting, cherry shrimp should be sheltered and kept away from potential predators. Otherwise, their soft exposed bodies will become a delicious meal for other tank residents.

Not unless you want to tackle commercial breeding, then you really don’t need sophisticated equipment to breed cherry shrimp. All you need is your regular tank setup and follow these simple steps:

Feeding your cherry shrimp with high protein foods will increase their fertility and body size. Remember that the larger the female, the more eggs it can carry.

Aside from naturally occurring algae, you can supplementally feed your cherry shrimp with commercial shrimp foods. The key here is regularly feeding them with a small amount of feed. In this way, there will be no leftovers that can degrade and affect the quality of your water.

While it only takes 30 days for cherry shrimp to reach sexual maturity, it is best that you condition them for 5 months. By that time, you will have larger females and sexually active males.

You don’t need to do artificial insemination. Allow nature to take its course. Instead, what you can do is provide hiding places where the female can take refuge.

Once the female has taken refuge and is ready for mating, it will release a chemical called pheromone that triggers and invites the male to mate.

After mating, eggs are released and deposited under the female’s abdomen. She will take care of the eggs for 30 days by fanning them with their limbs allowing cleaning and egg oxygenation to happen.

With this, it is important not to disturb them during this stage. Also, you may consider transferring your fish to another tank, especially when the eggs are about to hatch. Otherwise, your fish will feast on the newly hatched shrimplets.

Cherry shrimps don’t have a larval stage. Once the eggs are hatched, they look like a miniature version of their adults.

Taking care of baby cherry shrimp is relatively easy. Live moss is a great food source for baby shrimps. Moreover, having additional hiding places (like a shrimp cave) gives them shelter and protection while they grow up.

Cherry Shrimp as an Invasive Species

The tropical freshwater streams of Taiwan are the native home of cherry shrimp. However, with its growing number of breeders, cherry shrimp has been traded globally and some of them were accidentally or intentionally released in the wild.

A number of cases have already been recorded and their release and introduction to a new environment allows them to proliferate and take over the local shrimp population.

In Poland, cherry shrimp have been found in canals. While Poland is a temperate country, its canal waters are conducive for cherry shrimp growth as they are streamed with warm wastewater from factories and manufacturing plants.

In Hawaii, the introduction of cherry shrimp in streams, reservoirs and springs has threatened the local Hawaiian shrimp as they compete for food, space and dominance.

What’s worse, the native Hawaiian shrimp is already considered an endangered species and the introduction of cherry shrimp in their habitat could mean their extinction.

At the end of the day, it is important not just to know the stocking density of cherry shrimp, but learning how to take care of them is also relevant. Who knows, when you master their care and maintenance, you might be successful with their tank breeding and be on your way to having your own cherry shrimp breeding facility.

Just a gentle reminder: once you have a lot of cherry shrimp breeders, make no mistake of releasing them in the wild as they can take over the local and native shrimp population. Moreover, this reminder is open ended and you can also remind your customers to do the same.