Goldfish are known as the most commonly-owned fish, which are available at many pet shops all across the globe. Goldfish are among the world’s longest-lived species, having the oldest surviving goldfish lasting 49 years.

Overall, goldfish housed in tiny containers could survive up to five years, whereas those housed inside the tanks may survive up to ten years. Pond goldfish have a lifespan of up to twenty years and occasionally even 30 or 40 years. 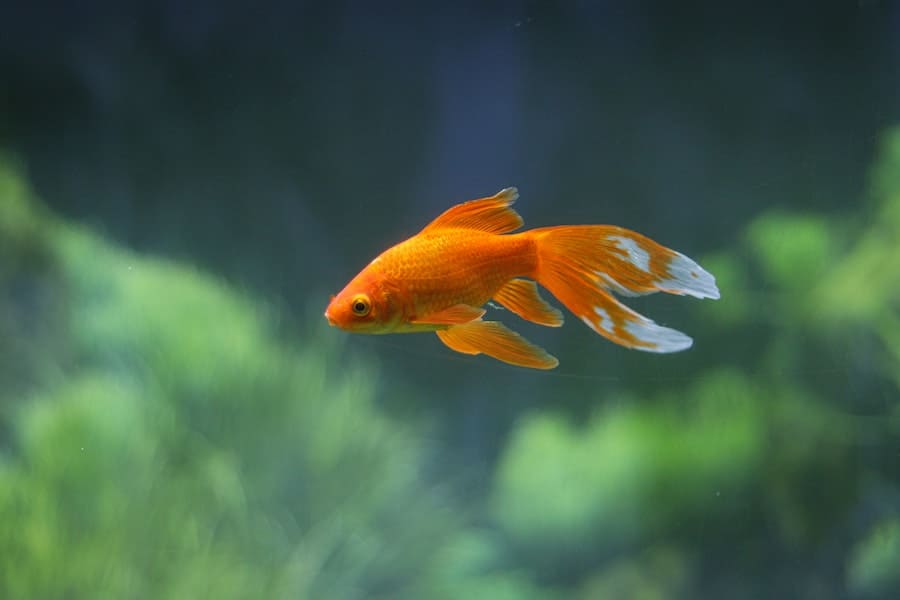 Since it affects how they thrive, maintaining their environment is important. Goldfish enjoy watery settings that are peaceful and move slowly in the outdoors.

Additionally, goldfish like cooler temperatures; therefore, they shouldn’t be housed in tanks with tropical species. Let’s examine the ideal temperatures for your beloved goldfish.

Your pet’s health may be greatly impacted by the water’s condition; under improper conditions, your goldfish may get ill and more vulnerable to infections. What is the ideal water temperature for these species?

Goldfish thrive in freshwater that is between 23 and 24 degrees celsius (73 and 75 degrees Fahrenheit).

While goldfish may survive in water up to 30 degrees Celsius, it is advised that they should be maintained between the mentioned temperature. Warmer temperatures might harm goldfish.

Goldfish are cold-water species that can tolerate a variety of water conditions both in captivity (in a tank) and outside (in rivers and streams). But, it will not imply that you must not keep their habitat clean.

If the aquarium temperature is extremely freezing, the goldfish would swim very slowly and may be less interested in any task, even eating. Their swimming efficiency suffers greatly.

Additionally, your goldfish are more susceptible to infections and other problems if the temperature they are swimming in is extremely hot; one such condition is Swim Bladder syndrome. Goldfish thrive in regular water temperatures.

Winter is indeed the worst time during the year for freshwater species. Goldfish may only live in an open river or lake until the aquatic level is sufficient to prevent its water from freezing entirely.

This would cause the water to crystallize as well as the goldfish, which is something you would not want to see. The fish may momentarily hibernate in order to survive the cold weather in a lake with a depth of a minimum of 4 feet.

Since goldfish are extremely long-lasting species and could, to some degree, withstand extreme water changes, they could also remain in the lake throughout the cold season as provided there isn’t a total frost. They require enough water and fresh air.

Nutrition is also essential for the goldfish’s survival throughout the cold season. You must begin giving fish cold water meals as soon as the water temperature drops under 15°C.

Reducing the amount of nutrition you provide them when the water temperature drops is a good idea. It is advised that you avoid giving them their meals when the temperature hits 9°C since at this point their metabolic rate shuts off, and their gastrointestinal tract cannot assimilate food.

Giving them chow during this temperature may lead to food being lodged in their intestines, resulting in major health concerns.

A lake thermometer may be used to determine the water’s temperature. The ideal water temperature for the cold season is between 60 and 75 °F.

You must take the bushes and other planted items out of the water as the temperature decreases.

If these items remain in the lake, they will begin to break down throughout the cold season, increasing the amounts of ammonium and nitrate and decreasing the water and oxygen ratio.

Lake nettings are the primary technique for stopping this. It has also been demonstrated that adding good microorganisms to chilly water throughout the winter is useful.

The good bacterias present in frozen or ice-cold waterbodies possess several beneficial elements that may assist to keep alive any organic plants and species inside the reservoirs.

They can also support and increase the chances of survival of the deep sea creatures inside the oceans that can not swim to the surface to get oxygen.

Your pet’s health and survival rate in colder months is impacted a lot by the tank water’s cleanliness and the temperature at which it is set. If you fail to provide these basic requirements to your goldfish, then it can result in its death or severe diseases.

The goldfish’s existence depends on keeping an opening inside the ice since the freshwater at the surface of the lake often freezes in the cold season.

You may drill a hole in the frozen ground to let undesired pollutants escape from the lake and to let air into the water. This could be accomplished by using an impeller or lake heater.

Goldfish prosper in tanks provided the container water temperature is monitored throughout the warmer months. It is advised that you constantly replace the chilled water as well.

The water shouldn’t become hotter than 90°F. Throughout the year-long, keeping the temperature somewhere around or below 70°F is ideal for the survival of goldfish.

During the summertime, chilled water would settle at the base of the lake (hypolimnion), while hot water would rise to the surface (epilimnion).

You shouldn’t be shocked if your pet felt more comfortable at the lake’s ground level during the warmer months since the hypolimnion has a higher concentration of soluble air than the surface layer.

It can impact all species such as microorganisms, aquatic plants, and other creatures apart from your pet goldfish. It is mainly due to their inability to survive.

Harsh temperatures (over 30°C/86° Fahrenheit) are quite harmful to your pet.

How to Cool Down the Water in Your Aquarium in The Summer?

Regardless of the technique, remember that fish are harmed by abrupt changes in the water’s temperature. Simply make an effort to maintain your tank cooler in the summertime.

What Water Temperature Gets Freezing for Goldfish?

Goldfish are cold-water species that reside in freshwater bodies such as ponds, channels, and rivers. But, this may not imply that they must be stored in freezing water.

The goldfish would discontinue consuming food and may possibly go into hibernation or expire if the environment is too low. Water temperatures under 50-55°F are considered too chilly for goldfish.

The goldfish would then get ready to hibernate after this has occurred. But, you may monitor and control the water temperature properly with the use of a lake warmer and thermostat.

How to Set the Optimal Water Temperature in Your Aquarium?

Tank maintenance involves regulating the freshwater to achieve the right temperature since the water fluctuations have a significant impact on the environment’s safety.

Lake water freezes in the cold season and warms up during the summertime, which has the biggest influence on water conditions.

Observing the internal temperature in the early hours, at lunchtime, and at midnight and calculating the average can help you be extremely accurate.

The PH balance may be monitored during the summertime using water performance testing equipment.

How to Change Your Goldfish’s Aquarium Water Safely? 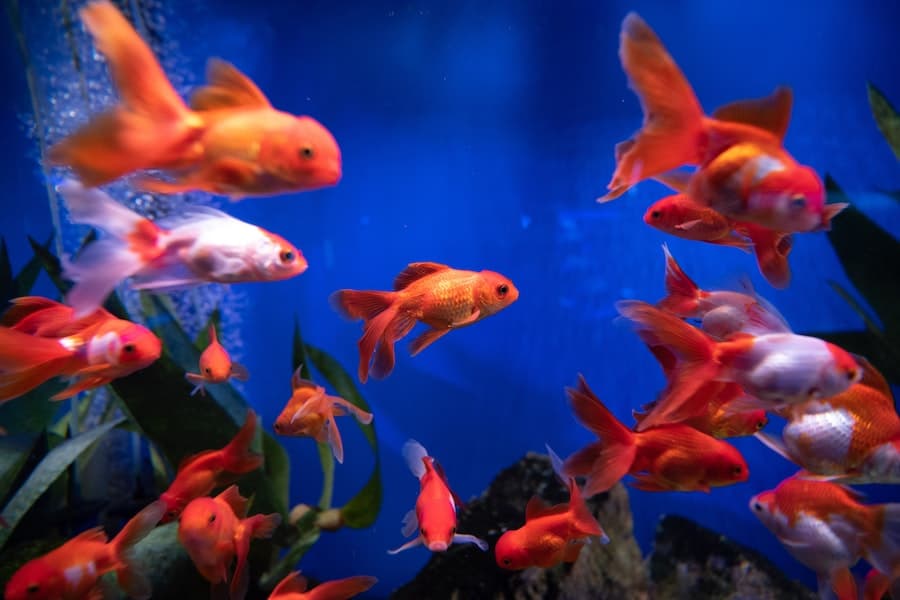 As a careful fish owner, you should keep the water temperature steady that lies under the optimal range in order to make sure that your goldfish stays healthy.

If there are too many fluctuations, then there’s a trick to bring the tank’s water within the optimal range. All you need to do is to keep on increasing the temperature by 10 degrees every hour.

Many experts like to dissolve water softeners in their house tank when they are replacing the water.

Moreover, you should also keep this thing in mind that your goldfish is prone to get a thermal shock if they notice any abrupt or significant fluctuations in the water’s condition.

If the condition is serious, it can possibly harm the fish. Therefore, it is advised that while changing the water from the reservoir, the fresh water should be no more than 2 degrees warmer than the water that was initially there.

When your colony has been subjected to a series of temperature changes, it would be a great strategy to add a high-quality filter pathogens product to assist your population recover as quickly as possible.

How to Tell if Your Goldfish Is Receiving Enough Oxygen in The Water?

In order to thrive, your goldfish, similar to all other species, need adequate oxygen from the atmosphere. To observe these species’ behavior, you must have keen observational skills.

When the oxygen concentration in the tank is reduced, the goldfish would come up to the top level to breathe air. You could stir the water around in the aquarium and then return to watching your pet.

You may have to acquire a larger aquarium or replace the contents of the goldfish that keeps gorging itself. The issue can occasionally be resolved by maximizing the water supply.

What Is the Optimal Ph Level for Your Goldfish?

A goldfish could live in a wide variety of pH levels. But, significant or major PH level fluctuations are challenging for goldfish to adjust to.

As per the studies, goldfish should have a PH between 6.0 and 8.0. It indicates that goldfish may live in an environment that is only a little bit hypertonic or alkaline.

To determine the degree of acid content or bicarbonate, choose a ph meter to examine.

What Diet Is Good for Goldfish’s Health?

Food quantity and quality is a key to proper goldfish care. It has a direct impact on your fish’s well-being. Goldfish food was found to contain more carbohydrates than others, and it also contains less protein than other fish foods.

There are already-made goldfish foods available in local pet shops, so you should not just pick up any food. They are available in flakes, pellets, or a mixture of both.

There are some factors to consider before deciding the type of food to go for. You need to consider their size, pollution, and nutritional value.

Goldfish like lower water temperatures varying from 62 to 74 degrees Fahrenheit. Also capable of withstanding temperatures outside of this spectrum, they may endure both.

Maintaining a steady temperature is essential for the happiness and well-being of goldfish. Whenever the water temperature fluctuates, these species experience anxiety and become vulnerable to marine infections.

Experts recommend that you get a high-quality thermostat to guarantee that the temperature inside the aquarium is optimal. If you have exotic goldfish, you need also to have an aquatic thermostat.