After digestion, fish and other tank residents release biological waste in the form of poop. While poop rarely floats, it sinks and accumulates over time in the substrate. If left behind, poop will degrade, releasing ammonia which is detrimental to fish health.

Aside from mechanical filtration and manual cleaning, some tank residents (like shrimps and snails) consume these biological wastes. But how about fish? Do they eat poop?

Though not all, some fish do eat poop. But for the poop-eating fish, is poop truly a part of their diet?

Join us in this article to learn what these fish species are and find out if they are the best examples of coprophagia or animals that eat excrement.

And please, don’t feel disgusted. These poop-eating fish are your assets in keeping your tank poop-free. Somehow. 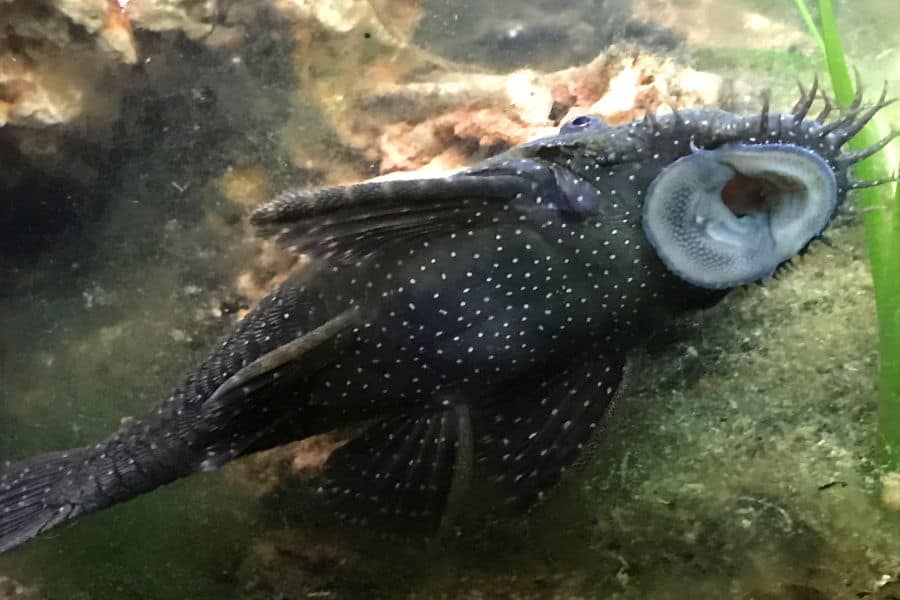 All species of plecos are known to eat poop. Their main asset in consuming biological waste is their subterminal mouth.

Their lower jaw is shorter than the upper jaw forming a suction cup. As it feeds along the substrate, it vacuums out anything trapped or attached like algae, leftover food, and poop.

Like plecos, Corydoras are bottom dwellers with the same subterminal mouth. They use their vacuum-powered mouth to scour for any potential food (including poop) settled in the substrate.

Despite being smaller than plecos, Corydoras are more active. Corydoras and plecos complement each other. Corydoras are active during the day, while plecos are known for their nocturnal lifestyle.

If there is a fish that is notorious for eating its poop, then nothing beats the goldfish.

When edible food is unavailable, goldfish will scavenge the substrate. Goldfish will eat anything that fits the mouth, and poop settled in the bottom will suffice a goldfish’s voracious appetite. 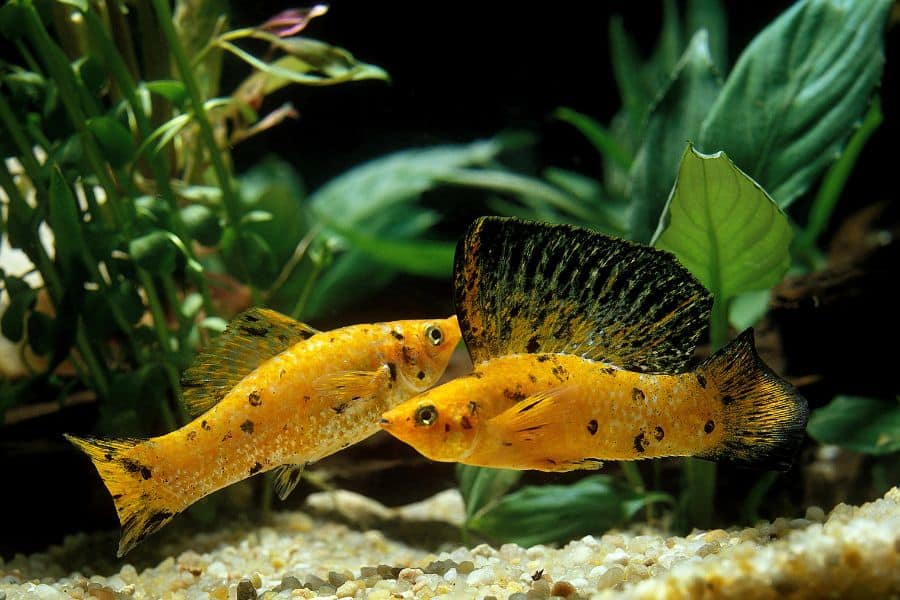 Mollies have a unique way of eating poop.

Unlike scavengers, mollies eat freshly excreted poop as it falls and drifts down the substrate. 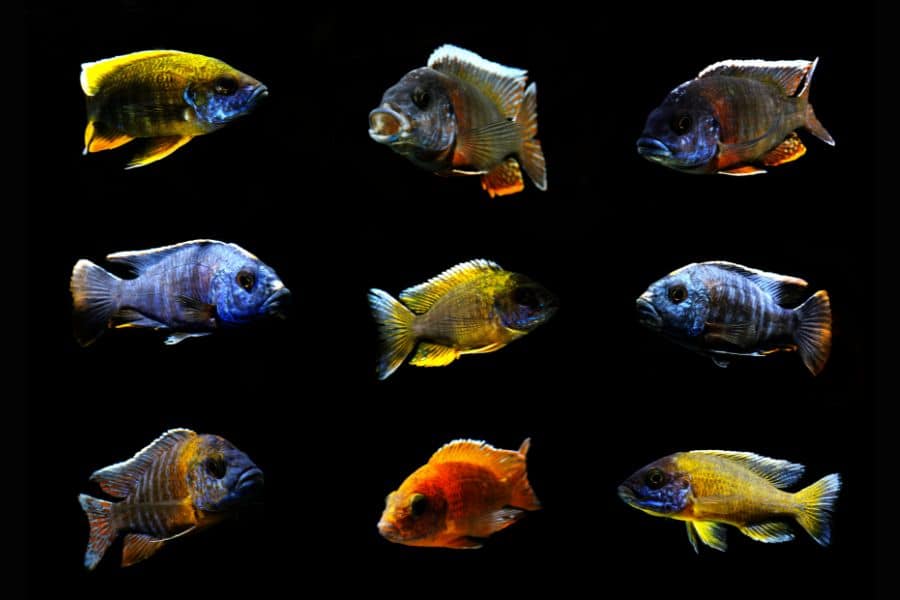 In general, cichlids are voracious eaters. When underfed, cichlids will eat anything to suffice their hunger. When hungry, their food items are decaying matter (like poop) and cannibalizing their kind.

A not so fun fact. The old tradition of farming cichlids involves feeding them with hog and poultry waste.

Rabbitfish are a tasty delicacy in Asia. But ever wonder why they are so flavorful? It is because of their poop-eating habits.

With the scarcity of food in their natural environment, wild rabbitfish eat poop, including human waste. If you do not properly feed them in the tank, you will realize that their instinct applies both in the wild and in the tank. 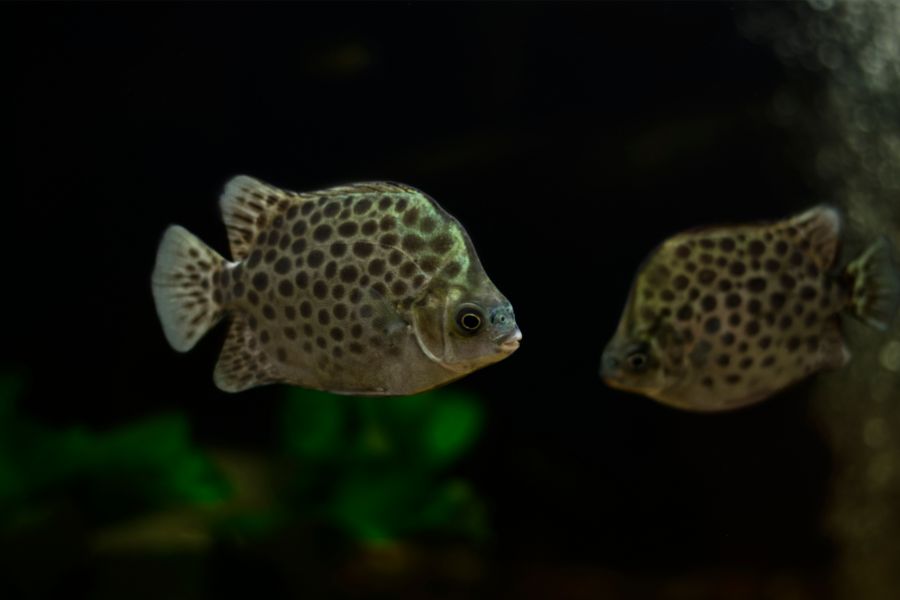 Despite being considered a moderate consumer of poop, scats got their name after their poop-eating habits.

Their genus is Scatophagus. It is from the Greek word skat which means dung, while the Latin suffix “phagus” means to consume. In other words, Scatophagus translates to feces eater. 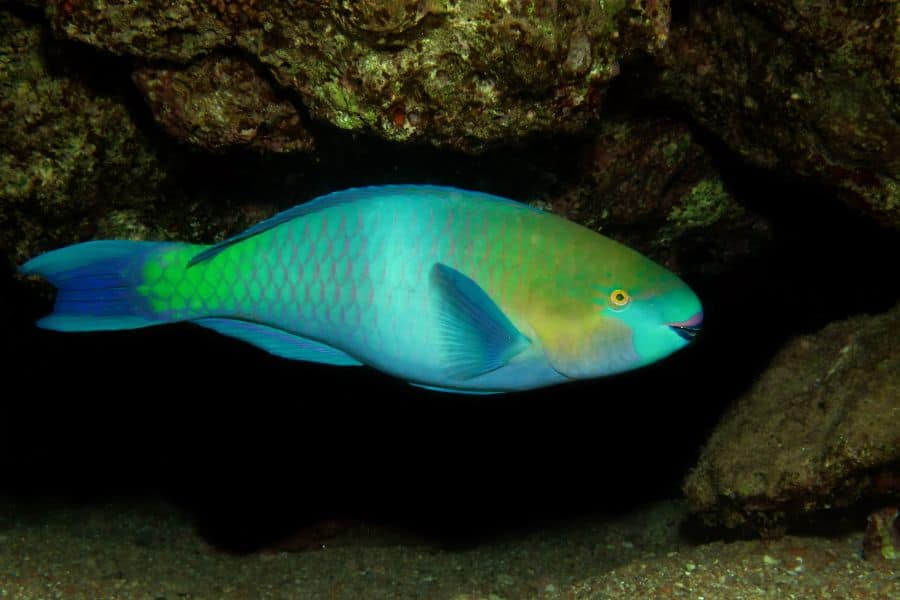 Parrotfish are herbivores and feed on encrusting algae and algae hidden beneath a coral skeleton.

Algae alone will not provide ample nutrients to the parrotfish. It is why wild parrotfish feasts on poop as an alternative source of nourishment. It can also happen to tank-reared parrotfish if underfed. 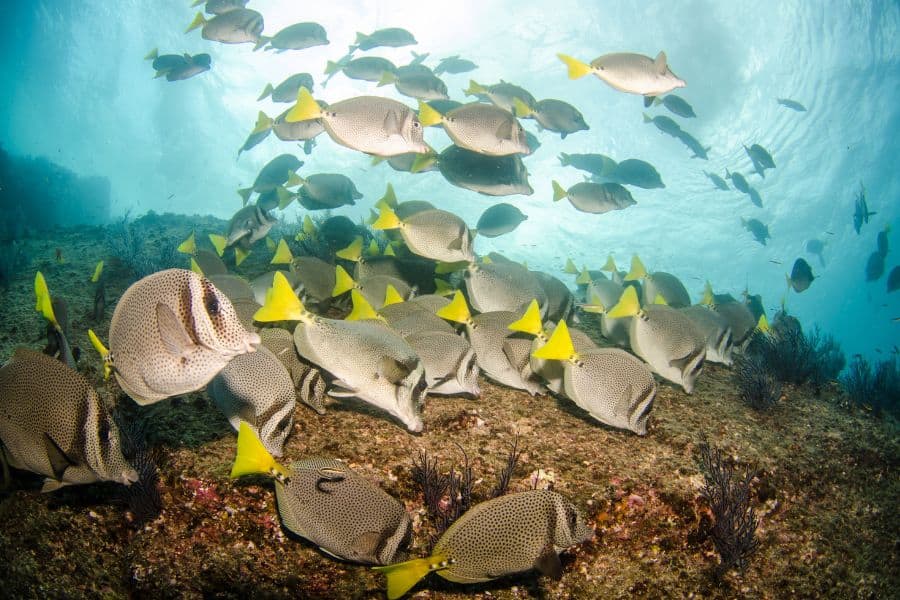 Like parrotfish, surgeonfish prefer to eat algae. However, algae have low nutritional value, and surgeonfish need to find an alternative source. It is where poop and other waste materials come into importance.

The species we described above exhibits traits of a poop-eating fish. Yes, they eat poop. But are they coprophagia in their purest form?

There is no such thing as a fish mainly relying its nutrition on poop. Biological waste material can serve as an alternative source of nutrition.

#1: Poop-Eating Fish Will only Eat Poop

It is entirely false.  One of the reasons why some fish eat biological waste is that they have mistaken poop for unconsumed food.

By now, you may have observed that poop-eating fish will spit out the ingested waste. And here’s the thing: the more poop they eat, the more prone they are to illnesses. While poop may have some degree of undigested food, it has a colony of bacteria and viruses.

Poop-eating fish do need proper nutrition through feeding. Depending on the fish, you need to provide them with a primary form of nutrition. It may come from natural foods, commercial feeds, or organic supplements.

#2: Poop-Eating Fish as An Alternative to Filter and Manual Cleaning

It is often the mistake of newbies. They mainly rely on poop-eating fish to do the dirty work and keep their tank poop-free.

It should not be the case.

Here are the consequences if you depend on poop-eating fish and rely on their poop-eating capabilities to do the cleaning.

Poop-eating fish has a limit on how much waste they can ingest. They cannot eat poop forever. Once they reach their boundary, poop is left behind in the substrate to rot.

With them not eating poop, waste material starts to build up. Sooner, your filtration system can no longer keep up, and water quality will collapse.

Some of these poop-eating fish are algae eaters. They consume algae and poop side by side. However, you may wonder why algae continue to flourish.

The reason for this is the deteriorating water quality. Algae love dirty water. More poop means an ideal environment for algae growth.

As poop rots, it becomes the perfect environment for breeding bacteria.

There are two ways of transmitting bacterial colonies in the poop to the fish. First is the direct ingestion of the rotting poop. Second is the dispersal in the water, causing fin and body infections.

Nothing beats a filtration system and manual cleaning.

The passive cleaning of a filtration system collects unwanted waste and prevents it from degrading and releasing ammonia. And for unfiltered waste, manual cleaning using vacuum tubes will surely siphon them out of the water.

Now that we know that poop is not part of a fish diet, we look at the triggers of their coprophagy.

As long as edible food is available, fish will not eat poop. They may, but again, it is a matter of mistaken identity.

Coprophagy is triggered when they are hungry, especially if food is not available.

You can try this yourself. Intentionally miss out on your feeding schedule. Once your fish go hungry, they start scavenging the substrate where the poop has settled. If satisfied with your observation, commence feeding and do not prolong hunger since they will ingest more poop.

To eliminate this trigger, install your tank with a filter system and do a frequent gravel suction cleanup.

Poop is the main ingredient for this poop-eating fish to be called such a fish.

However, with the absence of poop (or limiting their quantity), these fish may rightly be called a pleasing tank attraction rather than a disgusting poop-eating fish (which is better for us).

We tend to overfeed our fish, especially if we want fast growth. However, overfeeding means more food to be digested, which equates to more waste excreted.

You only give the right amount and quality food. And besides, there is no point in growing your fish so fast. One of the noble tank aesthetics is seeing your fish grow naturally over time.

The more fish, the better. It is often the mistake of newbies. Even I did this back then when I was starting. Just imagine this, I stocked my 20-gallon tank with 50 goldfish (since it was on a 50% discount sale).

The next day, poop littered the substrate. Now, imagine how much more if I overfeed them (which I did).

Follow the recommended stocking density. Lesser is even better.

What Is the Term Used to Describe an Animal Eating Excrement?

Do Plecos and Other Algae Eaters Eat Fish Poop?

Yes, they do. But again, we iterate that poop is not part of their diet. The consumption of poop is a matter of accident and mistaken identity.

Because of the dense biological mass it carries, poop naturally sinks to the bottom. However, on rare occasions, it floats.

When poop floats, you should be alarmed as it has several indications.

The quality of the feed you’re using may not be substantial. It can also indicate that your fish may suffer from bacterial infection or stress. A sudden change in water temperature can also affect poop buoyancy allowing it to float to the surface.

How Long Does Fish Poop Turn Into Ammonia?

Although most of the ammonia from fish exits in their gills, a small amount is found in their poop.

When poop is left alone, biodegradation occurs and releases ammonia. From this moment on, you can expect that the health of your fish and water quality is slowly affected.

Do Shrimps and Snails Eat Poop?

However, they are not the best examples of coprophagia. Eating poop is a matter of accident and is only mistaken as leftover food.

Closely examine their feeding behavior. You will see that shrimps and snails will munch on the poop at first. But in a matter of seconds, it will spit out the ingested waste.

Poop-eating fish exist, but they are not coprophagia in their purest form.

Their poop-eating capabilities do not mean we rely on them. It can complement the cleaning, but we should not put the heavy burden solely on them.

And lastly, why feed your fish with poop. What’s the point of pursuing the hobby if you don’t have time and effort to clean your tank and provide them with quality food?