Because of their bright colors and high activity, mollies and platies are highly sought after by both amateurs and professionals but, due to their similar appearances at first glance, they can sometimes be difficult to differentiate.

In this article, we’ll be going over the similarities and differences between the appearances, origins, and behavior of these two fish, and see if they can breed and coexist. 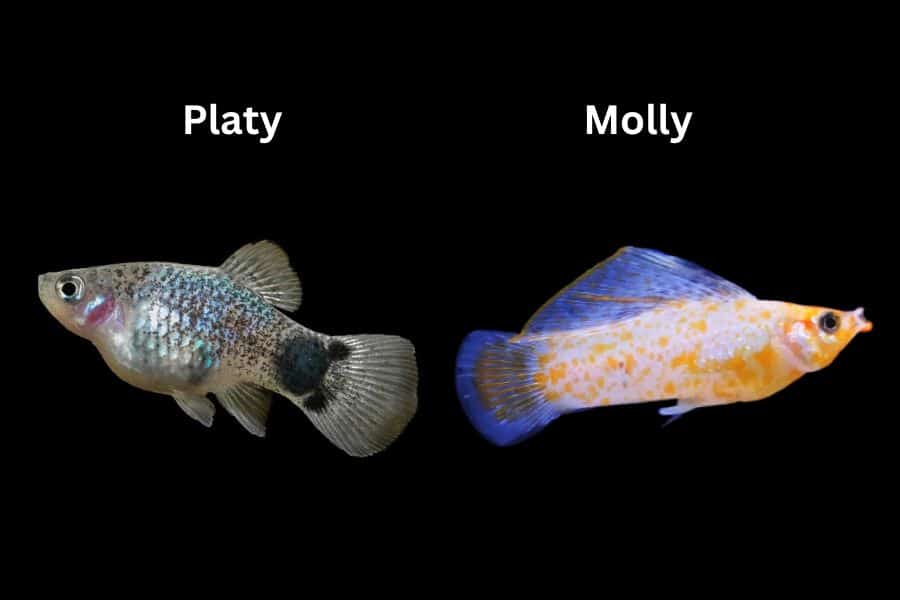 Though mollies and platies both belong to the family Poeciliidae, they stem from different genera, hence they are unable to crossbreed. Platies are also smaller and rounder in shape compared to mollies, and the former eat much more and can sometimes be more aggressive.

Before going into the comparisons in detail, let’s first take a look at the two fish species individually so that you’ll have a better understanding of both sides of the coin.

Platies are freshwater fish from the Xiphophorus genus, which in turn is part of the Poeciliidae family, that originated from the east coast of Central America and the southern areas of Mexico.

Though there are many varieties of platy, most of them are hybrids bred specifically for their appearances or traits; the three original species are the Southern, Variable, and Swordtail platy.

Many platies are highly hybridized, but some common colors that are found on the Southern and Variable platies themselves include yellow, red, green, and blue, which are thought to be the result of natural selection.

Platies are overall small in size (the Southern and Variable platies grow to 2.8 inches) and have laterally compressed bodies, small fins, and fan-shaped tails.

In the wild, platies can be found in peripheral, freshwater habitats such as ditches, backwaters, swamps, and ponds.

In captivity, they should consume fish pellets, flakes, live, and frozen foods. In the case of food, they can eat animals such as worms, shrimp, and fruit flies, as well as vegetables such as squash, lettuce, and cucumber.

Mollies are freshwater fish under the Poecilia genus, which is part of the larger Poeciliidae family. They originate from Mexico and are divided into three main types: The Common, Sailfin, and Mexican sailfin mollies.

Mollies are of a dull silvery color in the wild with some mature males showing a light blue/green sheen, however, mollies have been cultivated and bred to display a large range of colors such as silver, black, and yellow-orange. They have oblong, stout bodies with small flattened heads, convex-edged tails, and angular dorsal fins.

Mollies prefer to live in shallow waters close to the surface and, in the wild, are usually found near loosely vegetated coastal streams. Other habitats include lakes, estuaries, deltas, swamps, and marshes, among others.

As omnivores, mollies feed on small invertebrates, algae, and plant matter in the wild.

In your aquarium, it’s best to feed them slow-sinking vegetable and protein pellets, along with fish flakes, and live/frozen foods such as zucchini, cucumber, worms, shrimp, and daphnia.

Comparison Table Between Platies and Mollies

Here we have a comparison table showing the similarities and differences between platies and mollies on factors such as habitat, diet, and behavior.

Table 1: A comparison between platy and molly fish in regards to several traits

Now that we have a summary of the similarities and differences between the two fish species, let’s have a closer look at the differences and how you can use them to differentiate the two at a glance.

Differences Between Mollies and Platies

Mollies and Platies Have Different Origins

This difference in genera makes the two species somewhat distant from each other, though the fact that both belong to the same family (Poeciliidae) makes their similarities more reasonable.

Although they are similar in size and can have multiple colors, mollies and platies still have several minor physical differences. Mollies are overall slightly larger than platies.

Regarding body shapes, platies have shorter and rounder bodies, while mollies have slightly longer and sleeker bodies. Mollies also have jaws that are pointed upwards while platies have front-facing jaws.

Because it’s not easy to notice some of these differences unless you have both fish species together, you’d be glad to know that there are some color differences between the two.

Though they have colors that intersect, mollies typically have heavier-toned colors compared to platies. Platies, on the other hand, sometimes have spots on their bodies that are usually absent or fewer on mollies.

Mollies and Platies Have Different Tastes

Mollies and platies are both omnivores and require a balanced diet of proteins and plants, however, there are subtle differences between the two.

Platies feed mainly on vegetables in the wild, along with small insects and larvae. They require more plant material than meat, so spirulina and fish flakes work best.

Mollies, on the other hand, have a larger portion of their diet focused on protein, so they should be fed items such as fish flakes, protein pellets, spirulina, and a larger amount of frozen daphnia.

Mollies and platies are both generally peaceful and friendly, but there are several behavioral differences you should be aware of.

While both species are social and tend to stick in groups, platies are slightly more extroverted, so it’s best to have at least 5 of them in a tank. Mollies don’t require as much companionship, so 3 to 4 mollies in a tank would work.

Platies can also sometimes act aggressively due to a lack of females. Because platies are active breeders, it’s important to keep a ratio of about 1 male to 3 females to prevent them from acting out.

Mollies, on the other hand, are rarely aggressive, though it’s still preferred to keep 1 male to 3 female ratios so that the males won’t stress the females.

Generally, platies breed more often than mollies, but have smaller broods each time, averaging about 20 to 80 fry at a time. Mollies can produce broods consisting of as many as 140 fry at a time.

Gestation is usually 4 weeks for platies but can be as early as 3 weeks for mollies.

Adult mollies also eat their own fry, so you’ll need to separate the adult fish from the young to raise them. Platies don’t have such problems since adults don’t usually eat their fry, however, it’s still recommended to separate the female when she gives birth.

How Can You Tell a Molly from a Platy?

Now that we’ve gone over in detail the differences between the two fish species, let’s take a look at the most obvious signs you should look for when trying to differentiate between the two.

Related: How Long Do Mollies Live?

1. Can Mollies and Platies be Placed in the Same Tank?

As they are both relatively peaceful and social fish, mollies and platies can be placed in the same tank assuming you’re keeping them under optimal conditions.

Because mollies are somewhat more introverted and prefer to have areas for cover, it’s best for you to keep some artificial or natural items, such as rocks in the form of a cave, overturned clay pots, or driftwood with holes or arches, in the tank. Since platies are more prone to swim to the surface, they shouldn’t be bothered by these items in the tank.

Be sure to avoid larger and more aggressive fish, such as cichlids, and fin-nippers like bettas or vampire tetras, as they can quickly become confrontational and will most likely target your mollies due to their long fins.

2. Can Mollies and Platies Breed?

Because they belong to two different genera, the mollies and platies are unable to crossbreed. Even if they somehow manage to mate, their DNAs would be too different to produce any viable fry.

With that being said, it is possible to breed different species of mollies or platies within their genus. This happens quite frequently and is the main reason why there are so many variations of these species in captivity.

Though mollies and platies may appear similar at first glance, there are several differences once you take a closer look.

However, despite these differences, at the end of the day, these two fish species go well together, and, assuming you’ve kept the appropriate conditions for them in the tank, they should be able to call your aquarium home in no time.