The electric blue ram is one of the most stunning freshwater species in the aquarium hobby. With their bright blue coloration, peaceful nature, and inquisitive personalities, they make a great addition to any tank.

However, the species can be difficult to keep as they are generally quite sensitive. It’s important to provide them with the correct environment to ensure they stay happy and healthy. 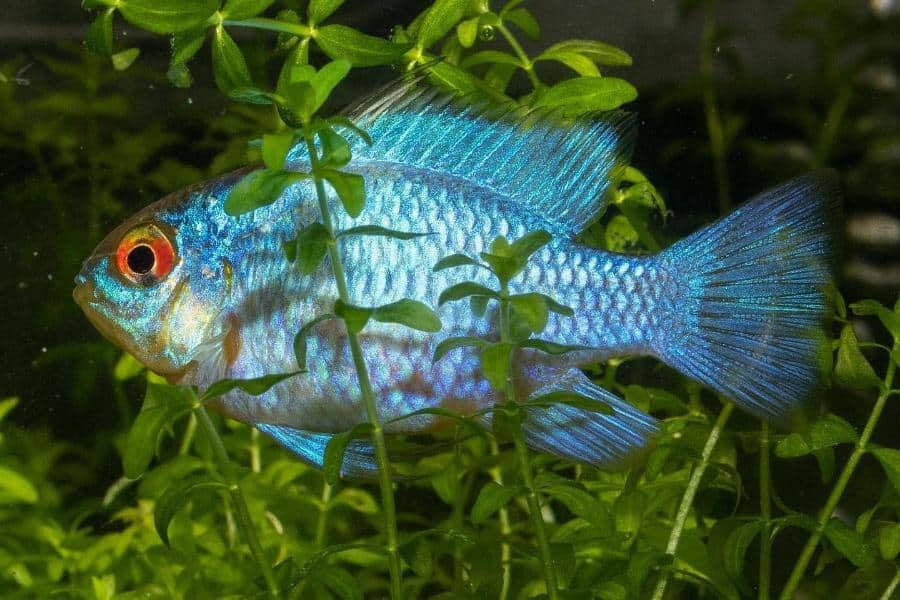 The electric blue ram (Mikrogeophagus ramirezi) is a tank-bred color strain of the German ram cichlid. Wild rams are native to South America and are commonly found in the Orinoco River Basin in Venezuela and Columbia.

The waters in these areas are soft, fast-moving, and filled with thick vegetation. Wild German rams tend to favor waters rich with tannins to help keep them sheltered from the sun and predators.

As you might have already guessed from their name, the electric blue ram is a bright blue color, which is enhanced in the right lighting. In low-light conditions, the fish is a more pearly white shade.

Electric blue rams have an oval-shaped body, pointy fins, red eyes, and a yellow splodge on the top of their heads. Shortfin and long-fin variants of this fish are also available on the market.

In addition, there is a selectively bred variant of the species known as the balloon electric blue ram. This fish features a shorter and stouter body shape than the standard ram cichlid.

German blue rams are difficult to sex unless you have a breeding pair as males and females tend to look alike. However, male rams usually have a more elongated body than females, as well as a longer dorsal fin that ends at a point.

The electric blue ram is a relatively small fish that only reaches around 2 to 3 inches in length. The majority of specimens sold at pet stores are juveniles, so they will be considerably smaller.

Electric blue rams have a fairly short life expectancy of just 3 to 4 years. Unfortunately, most rams seldom reach this age due to their sensitivity and poor survivability in captivity.

With careful care and optimal conditions, you can help increase the likelihood of your fish reaching their maximum lifespan, and potentially even extend it further.

German blue rams are mostly peaceful, but they can become territorial or aggressive during spawning and if there are not enough hiding spaces in their aquarium.

You should make sure your tank contains an adequate number of plants, rocks, driftwood, or decor to help your fish feel safer.

Despite their small size, electric blue rams need a fairly spacious tank as they are an active species. You’ll need at least a 20-gallon aquarium for a single fish or pair.

An extra 10 gallons is required for each additional fish. For instance, if you’d like to keep 4 electric blue rams, you’ll need at least a 40-gallon tank.

Like most cichlids, electric blue rams can be territorial towards their own kind once they reach sexual maturity, so a bigger tank can help spread out the aggression.

In addition, if you want to keep other species with your ram cichlids, you’ll need a large aquarium to ensure each fish has plenty of swimming space.

Although the right size tank is important for keeping your blue ram cichlids happy, so is your tank setup.

As the species originates from a warm climate, you should make sure your tank is equipped with an aquarium heater. Good filtration is also crucial for keeping your tank clean and water parameters stable.

German rams can be fairly timid, so make sure they have plenty of live plants to hide behind. You can also add driftwood and Indian almond leaves to add tannins to your water.

Substrate should be fine sand or gravel as the species spends a large portion of their time at the bottom scavenging for food. Dark substrate can help make your fish’s color look brighter, so this is worth considering.

German blue ram cichlids are very sensitive to fluctuations in water parameters, so you need to make sure your water chemistry is stable at all times.

Due to their peaceful temperament, electric blue rams should be housed with other passive small species of fish with similar water requirements in a community tank. They are easily stressed out by boisterous and aggressive fish.

Aquatic snails and shrimp don’t usually make suitable companions for German blue rams as they are a tempting snack!

The german electric blue ram is an omnivore that feeds on insects, small invertebrates, and plant matter in the wild. In captivity, these fish should be given a variety of freeze-dried, frozen, and live foods to enhance their immunity and coloration.

You can offer rams high-quality fish flakes or pellets, alongside brine shrimp, bloodworms, tubifex food, and the occasional leafy green vegetable. Make sure the food is small enough to fit inside their mouths.

Electric blue rams can be fed 2 to 3 small meals every day. Only give your fish as much food as they can finish in around 2 minutes, then remove any leftovers.

Electric blue rams are relatively easy to breed in the home aquarium as males and females will naturally pair off with one another. An interesting aspect of these species is that they are monogamous and typically mate for life.

Rams usually reach sexual maturity at around 4 to 6 months old, at which point they will look for a mate. Ram cichlid pairs will usually spawn once a month once they are adults.

However, you can encourage your fish to spawn by making sure your aquarium water is soft and has a pH of between 5.5 to 6.5. You should also Increase the temperature of your aquarium to approximately 82 °F.

Feed your fish protein-rich frozen or live foods like brine shrimp to prepare them for the breeding process. Rams can be aggressive towards other pairs during mating, so make sure your aquarium has lots of hiding spaces and plants.

When your female fish is ready to mate, she will become larger (due to being filled with eggs) and more vibrant than normal, and her stomach will display a pink patch.

During spawning, the male and female will chase and twirl around each other. The female will then lay her eggs on a flat surface or inside a small dug-out pit on the surface. Females tend to lay between 150 to 300 eggs at a time, but some may lay over 500.

Both the male and female electric blue ram cichlid tend to the eggs, so you don’t have to remove the parents after the eggs have been laid. They will each take it in turns to guard the eggs against predators and fan their fins over them, the latter of which helps prevent bacteria and fungus infections.

Ram cichlid eggs usually take around 40 hours to hatch. However, the fry will not become free-swimming until 5 days later. At this stage, the offspring will school with their parents and learn how to scavenge for food.

Unfortunately, it can take a few times for electric blue rams to have a successful spawn. New parents may eat their eggs or fight with one another, but they should eventually get it right.

How Big Do Electric Blue Rams Get?

The average electric blue ram size is between 2 to 3 inches in length. Males tend to be slightly bigger than females once sexually mature.

How Many Electric Blue Rams Should Be Kept Together?

Electric blue rams should be kept in pairs, ideally one male and one female. Small groups can also work for these species, but try to make sure there is not an odd number of fish.

German rams will pair off with the opposite sex and tend to mate for life. They can be territorial during the mating season, and males in general can be aggressive towards other males.

What Fish Can Live With Electric Blue Rams?

Make sure your aquarium is large enough to accommodate all species.

Yes, you can keep electric blue rams alone as long as you provide them with lots of enrichment. However, the species thrives most when kept in male/female pairs.

How Can You Tell If a Ram Fish Is Male or Female?

You can tell whether your electric blue ram is either male or female by looking at their body and dorsal fin shape.

Males typically have slender and elongated bodies with pointier dorsal fins. In contrast, females have plumper bellies with less prominent and rounder dorsal fins. They are also smaller in size.

During the breeding season, female ram fish will usually have a pink tinge to their stomach.

As long as you keep on top of tank maintenance and ensure your aquarium has stable parameters, electric blue cichlids are a great fish to own.

Their beautiful color and peaceful nature make them a great addition to a species-only or community setup. However, they can be a little sensitive, so they’re more suited to experienced aquarists.

Make sure you provide ram cichlids with at least a 20-gallon tank for a pair and feed them a high-quality and varied diet.

If you’re looking for more informative posts on fish species, check out our other articles like our detailed roseline shark care guide.