Goldfish are active swimmers. They move and play around a lot.

With their energetic stamina, rest is deemed essential. But how do goldfish rest? Do they go to sleep?

Yes, goldfish rest and sleep. But you may wonder how.

Do they lie down and close their eyes? Which part of the tank is considered their bed? Do they prefer naps or sleep for long hours? Do they sleep with the lights on or off?

And by the way, have you ever seen a goldfish sleep? Join us in this article as we answer all these questions.

Bedtime and Sleeping Environment for Goldfish

Surprisingly, goldfish have sleeping habits as humans do.

To make them sleep, they require certain conditions to make them less active and trigger sleepiness.

Unlike the night sleeping pattern of humans, goldfish have no specific bedtime.

Regardless of the time, sleepiness in goldfish is triggered when the environment is conducive.

As long as there is light, goldfish will stay active and will never go to sleep.

When you have an overhead light turned on, your goldfish will remain active even if it is past midnight.

A dark and quiet environment is what makes goldfish fall asleep.

The trick here is to create a gloomy and shady environment.

The degree of noise can also influence the sleeping habits of goldfish.

Quiet and peaceful surroundings can make a goldfish easily fall asleep. However, they are awakened, disturbed and startled when they hear a noise.

How Do Goldfish Sleep? 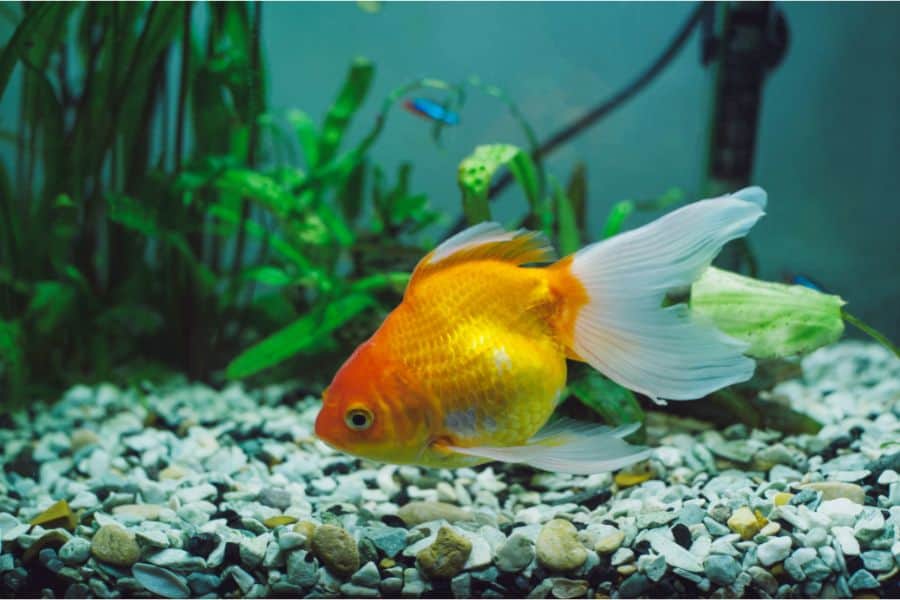 Now that we know how to make our tank conducive for goldfish sleeping, it is imperative to know if they are truly sleeping. These are some of the indicators that your goldfish is sleeping or about to sleep.

Staying an Inch Above the Substrate

When active, goldfish swim to any part of the tank. But when tired and conditions are conducive to sleeping, they will look for a spot to rest. Usually, they occupy an inch above the substrate.

It is rare for goldfish to rest and sleep at the surface. But they do. Cases like this would indicate something is wrong with the water quality (like low in oxygen) or that your goldfish is sick.

Once a goldfish finds a gloomy and quiet spot, they settle down until they are not moving. Please don’t expect them to lie down like we humans do.

When you see your goldfish hovering while motionless, that is a clear indicator of sleeping.

Once in a while they move slowly. It is to keep themselves balanced and stable.

As sleep progresses while hovering, you will see that their head starts to point downward. Consider at this point that your goldfish is well into its beauty rest.

Goldfish do change and fade their body color when sleeping. But make no mistake in treating it as cyanosis or sleep apnea.

The fading of body color hides the goldfish from predators.

Remember that goldfish are brightly colored, and fading away will create a camouflage effect.

It is often misleading but certain. Goldfish sleep with their eyes opened. And please don’t expect they might be half-opened like the lagophthalmos condition in humans.

Total or partial closing of the eyes in goldfish is just impossible. It is because they have no eyelids. It is also the reason why goldfish don’t blink.

While only a goldfish can answer this question, science can prove they don’t dream.

The brainwave activity of goldfish stays the same, even if it is sleeping. It does not experience deep sleep that is the forerunner of dreams.

Sorry goldfish. No sweet dreams for you.

Consequences of Not Enough Sleep

Sleeping is a goldfish way to re-energize. It allows proper bodily functions and for the immune system to work well.

If they lack sleep, your goldfish may not be as active as before and lose their natural healing ability against infections.

Their rate of metabolism will also slow down. They will eat less and lose their appetite.

We recommend you only turn your overhead light for no more than 12 hours. Otherwise, too much exposure to light makes your goldfish suffer from what we just described.

DIY: Training Your Goldfish to Sleep

If trained, goldfish can do tricks. Same with sleeping.

Following the right conditions and setting, your goldfish will sleep at your will.

The trick here is the absence and presence of light.

Turning on the overhead aquarium light during the day is typical. Most of the time, the lights will go on until night.

If you establish a specific time the lights are turned off and do this repeatedly every day, your goldfish will follow that pattern and sleep at that pre-set time.

Of course, you need your surroundings to be quiet. Otherwise, if noisy, the light triggers will not induce sleeping.

Try it yourself. It works for me without a food reward.

Differentiating a Sleeping Goldfish and A Sick Goldfish

Floating at the surface upside down, pale, mouth wide open, and body not moving. These are all indications that your fish is dead.

However, with a sick goldfish, there is a fine line in distinguishing them from just a sleeping goldfish.

A sick goldfish is not as active as a healthy goldfish, and its inactivity may look similar to a sleeping goldfish.

The body of a sick goldfish may look pale, and this change in body color (especially when not moving) may look similar to a sleeping goldfish.

A sick goldfish may stay at the bottom or in surface water motionless. However, in some cases, some goldfish do this while sleeping.

If your goldfish turns upside down, this is a clear indication that your fish is sick and not sleeping. It is an infection in their swim bladder, and being buoyant while upright will be difficult.

Use the triggers to differentiate a sick goldfish from a sleeping goldfish.

Turn on the light. If the goldfish remains inactive, then most probably, it is sick. If it moves and starts swimming, then it is healthy. You just startled it.

How Long Before a Goldfish Falls Asleep?

Some humans can sleep right away. Not for goldfish. It takes 15 to 60 minutes for a goldfish to fall asleep.

Goldfish need to settle down and change from active to relaxed mode. They do this by finding a conducive spot that is gloomy and quiet.

How Long Do Goldfish Sleep?

Goldfish will sleep for up to 12 hours a day.

Depending on the situation, their 12-hour sleep may be continuous or in short naps.

If you have a shady and quiet environment, you can expect your goldfish to sleep longer. However, they are easily disturbed by lights and noise.

Technically no. But it has a behavior similar to hibernation, called brumation.

Brumation in goldfish is caused by reduced metabolic activity.

Do Goldfish Sleep Together?

In the wild and an aquarium setup, goldfish do sleep in groups.

When they are awake and actively swimming, the normal behavior of goldfish is to group along. The same thing happens when they sleep.

Is It Okay to Disturb a Sleeping Goldfish?

It is okay to disturb them. But not frequently. Otherwise, you will disrupt their sleeping pattern.

Some studies suggest that waking a sleeping goldfish is beneficial to them. The reason is when they are awake, they become active and take in more oxygen.

What to Do if Your Goldfish Is Not Sleeping?

Reduce food intake before bedtime. Food triggers goldfish to be active. It may take some time before a goldfish relaxes after feeding.

Goldfish do sleep. They rest even more than the recommended 8-hour sleep of humans.

But the crucial thing in their sleep is to make their environment conducive and peaceful. Otherwise, their long sleep will downgrade into short naps. And illnesses are often associated with lack of sleep.

But why make your goldfish sick when you can train them to sleep?

It is the beauty of sleeping in goldfish. Though you and your goldfish live in different environments, you can simultaneously sleep side by side as the triggers of sleep in goldfish is also a conducive environment for sleeping in humans.

Sweet dreams, but only for humans and not the goldfish.