Bettas are undeniably beautiful, but they’re extremely territorial — making them the complete opposite of the relatively docile Guppies. Many aquarists say that these two species shouldn’t be kept together, but how true is this?

In this article, we’ll answer all the questions you have about guppies and Bettas. Can these two kinds of fish peacefully coexist in the same tank? Or will they fight each other until only one remains? Let’s find out!

Factors to Consider When Putting Bettas and Guppies Together 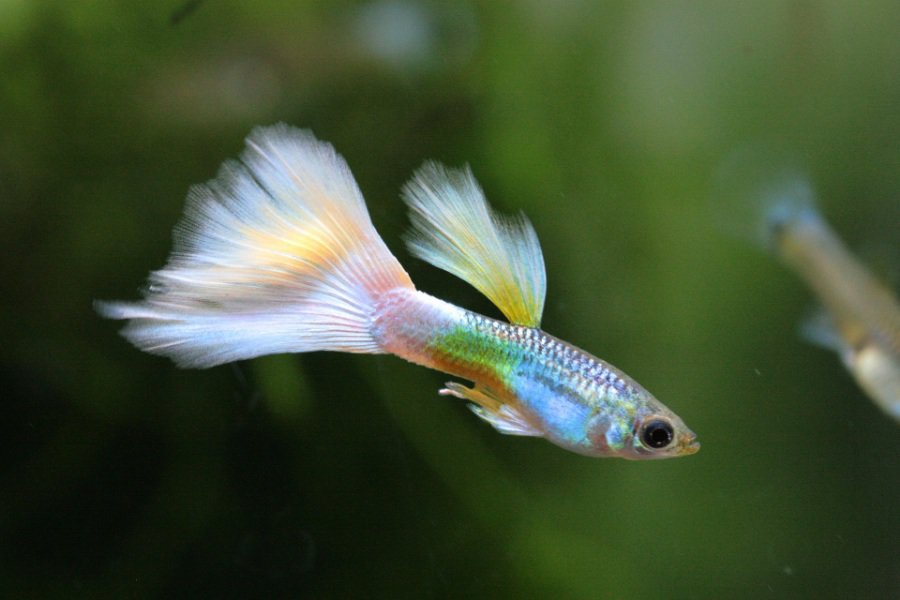 Although Betta fish and Guppy fish are two different species, they can technically live together in one tank.

However, there are a couple of things you ought to take into account before adding them to the same tank. Listed below are some of the most essential factors to consider.

The most important factor to consider when putting guppies together with a Betta is space.

Bettas are a species of fish that requires a lot of space to themselves. In the wild, they live in rice paddies and floodplains where there is a lot of room to swim.

For this reason, you will need to provide them with a tank that is at least 5 to 10 gallons in size. If the tank is any smaller than this, the Betta will not have enough room to swim and explore, and this can lead to health problems.

Guppies, on the other hand, need their own space as well. These are schooling fish, which means that they like to live in groups.

Being in a school of at least 3-5 other individuals will make guppies less stressed and more secure. However, housing this many individual fish means you need a pretty sizable tank, preferably 10 gallons or more.

Combined, you will need at least a 15 or 20-gallon tank to keep both fish species happy and healthy. If you don’t have the space for a tank like this, you shouldn’t put these two species together.

One of the main reasons why aquarists say never to put Bettas and Guppies together is how similar they are to each other, visually speaking.

Guppies and Bettas are both brightly colored fish that have long fins and tails. These similarities in appearance can often lead to aggression, as the Betta may mistake the guppy for a competitor.

It’s best to only keep Bettas with guppies that look very different from them. You can also opt for Guppy variants that have duller colors, as these are less likely to trigger the Betta’s aggression.

Fin length is another important factor to consider when keeping guppies and bettas together.

Most Betta variants have long, flowing fins that delicately trail behind them as they swim. While this makes them very beautiful to look at, it also means that they can’t swim as fast as other fish. This can be a problem when they’re housed with particularly playful Guppies.

In addition to being active swimmers, Guppies are notorious for fin-nipping. They may not do it out of aggression, but their playful nature often leads to them biting at the fins of other fish. This can cause stress and injury to the fish they’re nipping at.

For this reason, try opting for short-finned variants. There are certain Betta variants, such as the Crowntail and the Plakat, that have shorter fins and are less likely to be nipped at.

Keep in mind that Guppy personalities can vary greatly from individual to individual, so some Guppies are definitely more peaceful than others. There are also plenty of things you can do to reduce fin-nipping, which we’ll discuss in another section below.

Bettas, especially males, are well known for their high levels of aggression. In the wild, they are constantly fighting other males for dominance and territory.

For this reason, it’s best to keep Guppies with a female Betta rather than a male. Females are much less aggressive than males and are more likely to leave the Guppy school alone.

Of course, there are always some exceptions to this. Some females can be just as aggressive as males, while some males can be relatively peaceful. The best way to determine whether or not a Betta will be aggressive is to observe its behavior.

If the Betta is constantly flaring its fins and chasing other fish, it’s probably best to avoid putting it in a tank with guppies. However, if it’s relatively calm and relaxed, there’s a good chance it will do fine with Guppy fish.

Age is another important factor to consider when keeping guppies and bettas together. Younger fish tend to be more accepting of other fish than older fish. This is because they haven’t had as much time to establish their territory and establish their dominance.

As a Betta fish gets older, it will become more territorial and less tolerant of other fish. This is when you’re more likely to run into problems with aggression.

Because of this, it’s generally best to keep the Guppy school with younger Bettas. This is especially true if you’re keeping multiple guppies with a single Betta.

How to Keep Guppies and Betta Fish in the Same Tank 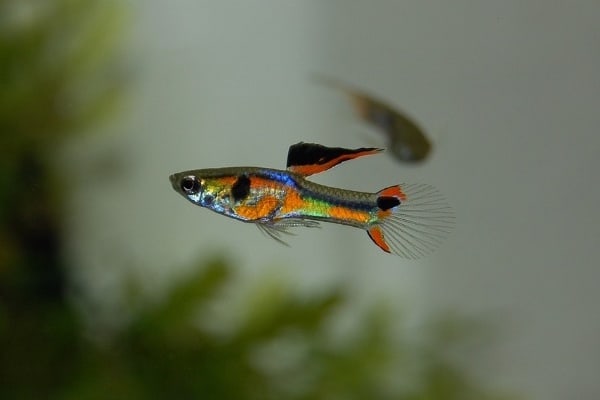 Now that we’ve gone over some of the things you need to consider before keeping guppies and bettas together, let’s talk about how to actually do it.

Here’s what you need to do to make sure these two species can coexist peacefully in the same tank.

Before you even set up your tank, you need to make sure you’re choosing the right fish.

As we mentioned above, not all guppies and bettas are going to do well together. Like humans, fish have unique personalities, too.

Some guppies are more peaceful than others, and some bettas are more aggressive than others. Plus, younger Bettas who haven’t had enough time to establish their dominance are usually more tolerant of other fish.

It’s important to do your research and select guppies and bettas that can stay relatively peaceful.

Here are some questions you need to answer:

Once you’ve answered these questions, you should have a good idea of which guppies and bettas are going to do well together.

Once you’ve selected the right guppies and betta fish, it’s time to set up your tank.

The first and most important part is choosing the size of the tank. Bigger is always better, particularly when housing two species that don’t always get along.

That said, a 20-gallon tank is already a good size for guppies and bettas. This will give them enough space to establish their own territories without being too cramped. If you can go for a 30-gallon tank, even better.

It’s also important to make sure you have plenty of hiding places and plants in your tank. This will give your guppies and bettas somewhere to hide if they’re feeling stressed or threatened.

And last but not least, make sure the water temperature is between 75 and 80 degrees Fahrenheit. Both species prefer warm water, so this should make them both comfortable.

3. Introduce the Fish to The Tank

Now that your tank is all set up, it’s time to add your guppies and bettas.

When adding fish to a tank, it’s always best to add the more peaceful fish first. In this case, that would be the guppies.

Add a few guppies to the tank and let them acclimate for a few days. Once they’re settled in, you can add the betta.

Again, it’s best to add a younger betta that hasn’t had time to establish its dominance. This will make it more likely to get along with the guppies.

Even if you’ve followed all of the steps above, there’s still a chance your guppies and bettas might not get along.

That’s why it’s important to monitor them closely, especially in the beginning.

Keep an eye on their behavior and look for any signs of aggression, such as chasing, nipping, or flared fins.

If you see any of these signs, it’s best to separate the guppies and bettas into different tanks.

Tips When Keeping Guppies and Betta Fish Together 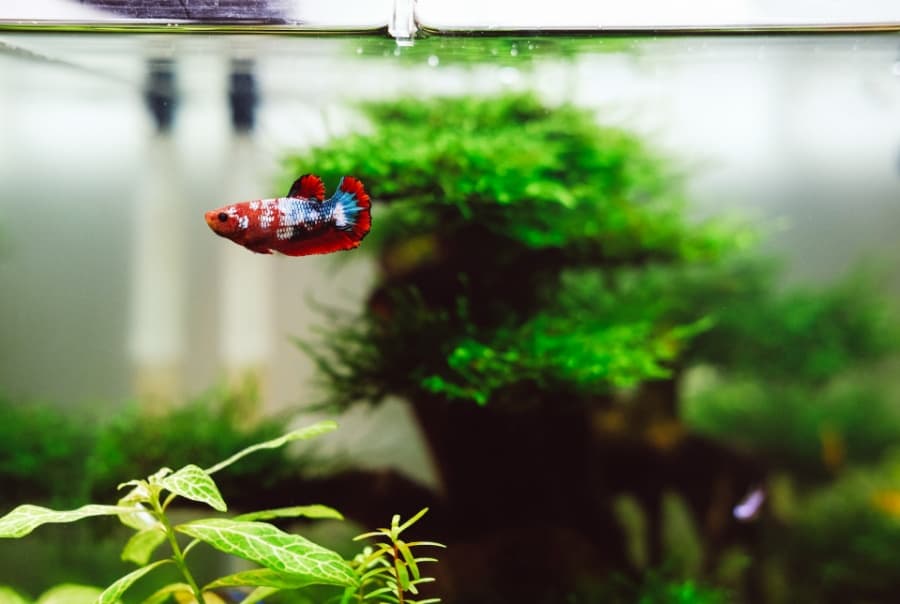 Interested in keeping guppies and Bettas together? Here are a few tips to increase your chances of success.

One of the best ways to keep guppies and bettas peaceful is to simply make the guppy school bigger.

While 3-6 guppies is the ideal minimum, a bigger group is always better, provided that your tank can accommodate them.

The more guppies you have, the less attention each one will pay to the betta. This can help keep the peace in your tank.

You may also want to rearrange the tank decorations from time to time. This will help keep the guppies and bettas from getting too comfortable in their respective territories.

By moving things around, you’ll make the fish feel like they have to re-establish their territories, which can help reduce aggression.

You can even do a major redesign if you wish. However, you can’t do this often, as it can stress out your guppies and betta. In fact, if it doesn’t work the first time, we recommend trying out other tips instead. Any changes involving the tank are always stressful to fish.

As we mentioned before, guppies and bettas both like to have plenty of places to hide. This is especially important when keeping them together, as it gives them a place to go if they feel threatened.

You can create hiding places by adding more plants, rocks, and decorations to your tank. Bettas, in particular, like having driftwood and caves to hide in.

Plus, not only can live plants provide hiding places, but they can also help oxygenate the water and remove toxins. So they’re a win-win!

Speaking of clean water, it’s important to make sure you’re changing it often when keeping guppies and bettas together.

Remember, guppies are known for being messy eaters, which means they produce a lot of waste. This can quickly pollute the water and lead to ammonia poisoning. Ammonia poisoning can cause serious health problems in both guppies and bettas, including heightened levels of aggression.

To prevent this, aim to do a partial water change (about 25%) once or twice a week. This will help keep the water clean and ensure your guppies and bettas stay healthy.

Upgrade to A Bigger Tank

If you have the space and resources for a bigger tank, we recommend making the upgrade.

Give Them Time to Adjust

When you first put guppies and bettas together, it’s important to give them time to adjust.

It can take a few days or even weeks for them to get used to each other’s presence. So don’t be too quick to judge whether they’ll get along.

With time, patience, and the right setup, there’s a good chance your guppies and bettas will learn to coexist peacefully.

How Many Guppies Can I Keep with My Betta?

As a general rule, you should have at least 3 guppies in one school. However, if you want to keep aggression and stress levels low, it’s recommended to add more guppies. 6-8 should be the ideal number.

Can I Keep Other Tankmates with My Betta and Guppies?

In most cases, guppies and bettas won’t kill each other. However, it’s important to note that bettas are known to be aggressive, and guppies are known for being nippy. So there’s always a chance that one fish could hurt or kill the other.

Guppies and Bettas are not the most compatible fish, but they can coexist peacefully if the tank conditions are right. By following the tips in this article, you’ll be well on your way to having a happy and healthy Betta-Guppy tank!