To increase aesthetic value, most newbie aquarists mix fish of different species in a single tank. It is why you see some aquariums with multiple species. So many species of fish that it gets overcrowded.

Among the fish often mixed are goldfish and guppies. But can they naturally co-exist? How about its water parameters? 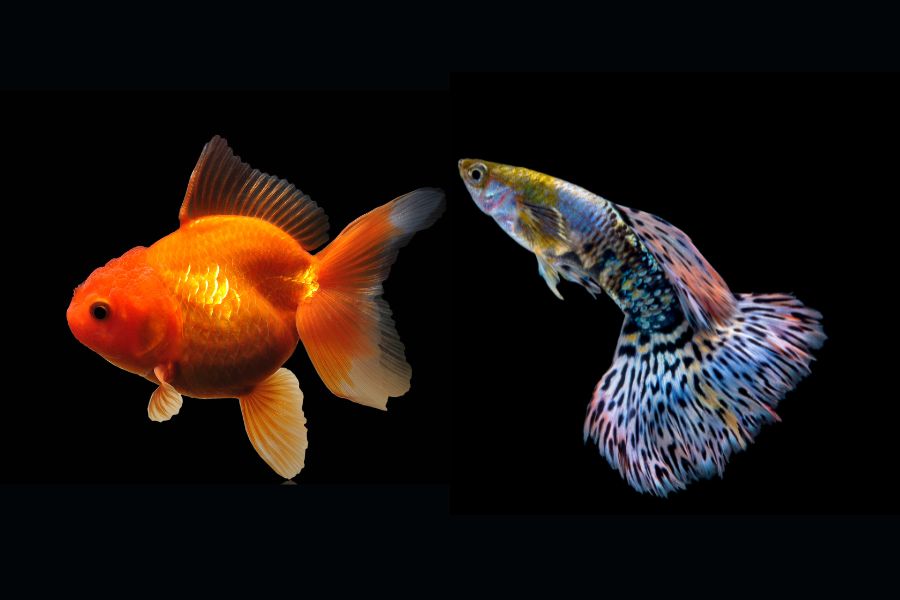 Join us in this article as we dissect their similarities and differences to see if nature permits these two species to live together.

Similarities Between Goldfish and Guppies 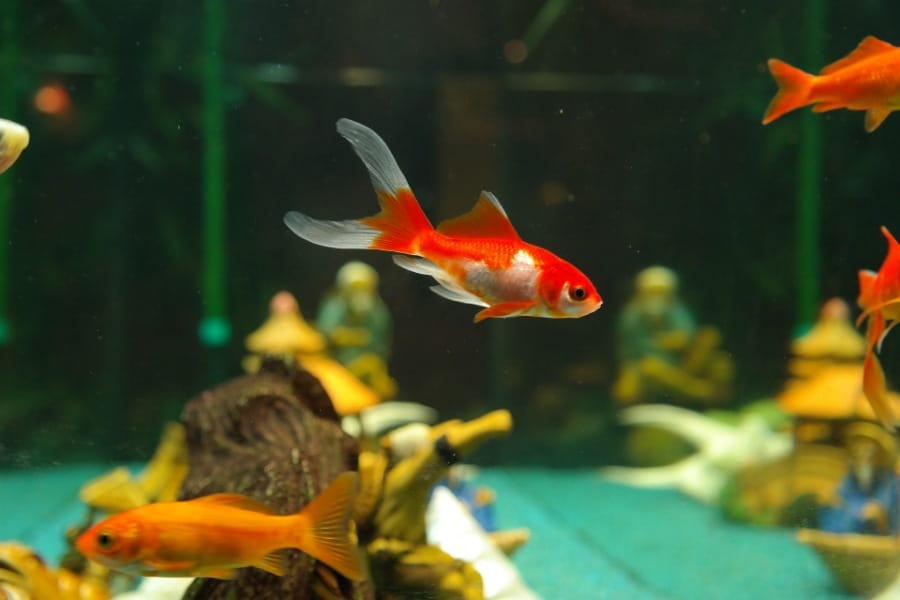 Let us first discuss the shared qualities of goldfish and guppies and in what aspects they are similar.

Both fish live in a freshwater environment. Goldfish originated from the streams of Mainland China. Guppies naturally thrive in the creeks of South America.

The salinity level of water should be at 0 ppt. Otherwise, sodium chloride or salt (like in brackishwater or saltwater) causes mortality.

The good thing about goldfish and guppies is that they eat both plant and animal-based feeds. Some feed traditionally given to them are flakes, pellets, brine shrimp, and vegetables.

However, this doesn’t mean that both fish are not picky eaters. One is a picky eater, while the other is a gastronome (to be discussed in the next section).

Related: How to Choose the Best Food for Guppies?

Goldfish and guppies have intricate decorative fins. Relative to body size, their fins are significantly longer. While this is an asset to tank aesthetics, it is a liability in the presence of other tank mates.

Other fish residents are attracted to the long fins of goldfish and guppies. It is only a matter of time before other fish may sneak a nip.

Fun fact. Goldfish and guppies are popular in selective breeding. The guppies are known for their colorful bodies and fins, while goldfish are for their variation in head shapes, eye sizes, fin shapes, and body figures.

Differences Between Goldfish and Guppies 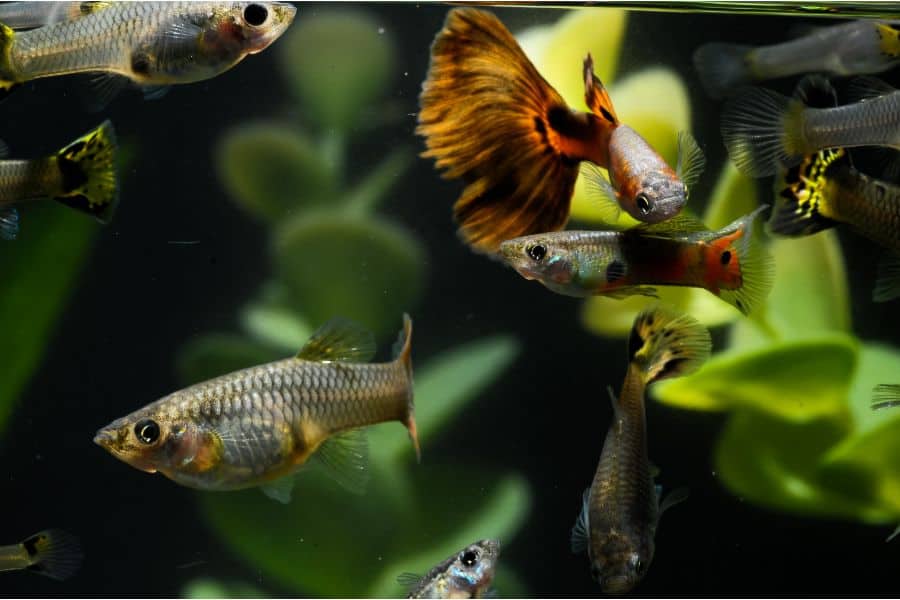 Since goldfish and guppies are two different species, we can expect a lot of differences between them. Listed here are their common differences.

Size and total body length are evident differences between goldfish and guppies.

With a maximum body length of 5 cm (2 inches), guppies are generally slim and tiny. On the other hand, goldfish are gigantic with bulging tummies. Even the most miniature of its species (the 6-inch twisty-tailed goldfish) is still considerably large for a guppy.

Fun fact. The largest goldfish was caught in Champagne in France and weighs 30 kilograms.

The potential problem with their size difference:

Goldfish will dominate your guppy. It occupies more space in the tank. Usually, goldfish swim in most parts of the tank, while guppies are isolated in hard-to-reach areas.

Additionally, if water conditions are conducive to rapid goldfish growth, they will reach a point where the size of their mouth can fit a guppy.

With this, do you think goldfish will eat guppies? The answer is in the next section.

Guppies are ovoviviparous and do not lay eggs. They are livebearers. Female guppies hold the eggs inside their body until they will hatch and release them alive as fry or baby guppies.

The potential problem with their difference in egg development:

There is no problem with how goldfish and guppies lay their eggs. However, as soon as the eggs hatch, the babies will become food, especially for goldfish (including their babies).

Guppies are tropical and goldfish are subtropical species.

The potential problem with their difference in ideal water temperature:

Initially, their difference in ideal water temperature will tell us that goldfish and guppies are incompatible.

However, there is a trick if you want both fish to co-exist. Remember, their ideal water temperature is overlapping. All you have to do is maintain your water temperature anywhere from 22 – 23°C (72 – 74°F). In this way, your tank is on the warmer limit for goldfish and at the colder end for guppies.

Preference for Acidic vs Alkaline Water

Guppies prefer alkaline water, while goldfish are on the opposite end.

The potential problem with their difference in pH requirement:

Growing goldfish and guppies in waters with unsuitable pH may lead to sickness and diseases. But it does not mean they cannot co-exist just because of this incompatibility.

Similar to addressing their water temperature needs, you still can meet their pH requirement by meeting halfway. Go for neutral waters and maintain the pH level at 7. A weekly water change will help you keep neutral waters.

If goldfish are humans, then they are classified as a gastronome. Aside from having a big appetite, they are voracious eaters and don’t reject any food given to them.

Guppies are the opposite. They are picky eaters. Initially, they will eat any food given to them. However, if they don’t like it, they spit it out.

The potential problem with picky eaters:

For an aquarium with goldfish and guppies, you either give food for both fish or use fish-specific feeds. Regardless of your strategy, goldfish always get a substantial portion. In effect, guppies may be underfed.

Aside from commercial feeds, try live feeding. You will not go wrong with brine shrimps. Their high-protein content is ideal for both goldfish and guppies.

Since brine shrimp spreads out in the tank, both fish are equally nourished, and nobody is left underfed.

Guppies are mid-range species that can live up to five years. Goldfish live longer and can go over for ten years.

The potential problem with their difference in lifespan:

There is no problem with the difference in the lifespan of goldfish and guppies.

However, we have a stigma. When guppies die, we always point to the goldfish as the culprit (if there is one in the tank). Sometimes it is true. But sometimes, it is not.

In some cases, our guppies are just too old that they can no longer compete or handle the stress.

Here’s a tabular rundown of the similarities and differences between goldfish and guppies.

Goldfish will eat any food that fits in their mouth. Sadly for baby guppies or fry that only measure a quarter of an inch (6mm), there is enough room for them in a goldfish mouth.

As the goldfish grow, and so does the size of their mouth, guppies (including their adults) can be a handy snack. So, the feeding frequency of goldfish and keeping them away from hunger is paramount to saving a guppy’s life.

Don’t worry if your goldfish will eat a few guppies. It’s part of nature and always remember that this is just a manifestation of the predator and prey relationship.

What we are concerned about is accidental choking. Guppies can get stuck in the goldfish’s mouth and cause mortality for both fish.

What Situation Do Goldfish and Guppies Fight In?

Guppies and goldfish are peaceful residents. However, when both fish are in a small tank, they fight and compete for space. They will also fight if food is scarce.

A 30-gallon tank is ideal for keeping guppies and goldfish together. But the bigger, the better.

Can Plants Provide Shelter for Guppies?

Yes, they do. However, we have to remember that goldfish are omnivores. Plants are in their diet.

As goldfish will only take a small bite, we recommend fast-growing plants like java fern, water sprite, and duckweed. Not only low maintenance, but they also stabilize the chemical composition of your water, especially nitrites and nitrates.

How Do I Make My Water Temperature Conducive for Guppies and Goldfish?

Since the temperature range of goldfish and guppies is overlapping, maintaining water temperature anywhere from 22 – 23°C (72 – 74°F) will suffice.

With this, you will need a thermostat or water heater. Configuring it to your preferred setting, you can do away with sudden temperature fluctuation.

To sum up, the ultimate question is if goldfish and guppies can be the best tank mates.

No, they’re not the best match. But, with a few steps described above, they can still co-exist.

Please do not envy what you see in aquarium shops. Maybe you have seen goldfish and guppies mixed in a single tank. Remember, they are experts and professionals. In your home set-up, you might be missing out on crucial points.

So, why risk it if you are unsure? Not unless you are ready for some guppies to be missing in action.

And if you are persistent in having goldfish and guppies, this is our recommendation. Place two identical tanks side by side. One tank for goldfish and the other for the guppies.

And if that is not aesthetically pleasing to you, have a large fish condo and see how elegance will spark if goldfish and guppies are separated.