Every fishkeeper has run out of food for their fish at some point and had to make do with what they have around the house. As you’re searching your kitchen for food you can give your fish, you may have come across a loaf of bread and wondered whether you can feed it to your fishy friends.

But, can fish eat bread? The short answer is no. Fish should not eat bread as they cannot digest the yeast and gluten it contains. 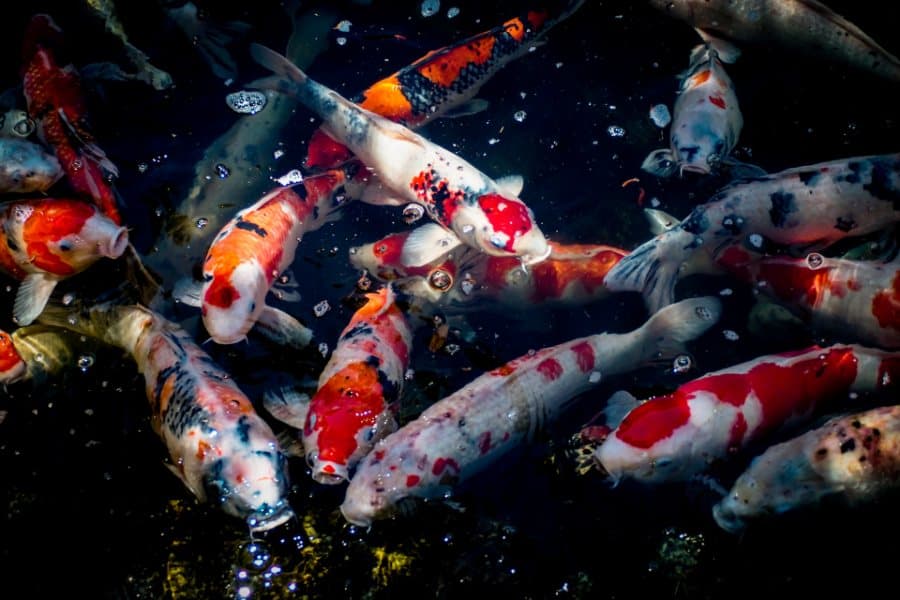 If you’re interested in a deeper answer or want to know some of the health risks of bread in fish, read on, as we’ll be covering all of that below!

Wild fish don’t normally eat bread as it isn’t something they’d find naturally. The only times a fish may eat bread is if it is offered to them, such as in an outdoor pond or indoor aquarium.

Even in these scenarios, bread can be harmful to fish, so you should avoid feeding it at home or in public waters like lakes, rivers, streams, and ponds.

Fish are opportunistic feeders, so they will eat anything that is thrown at them, including unhealthy foods like bread. Only fish-safe foods like fish flakes, green veggies, brine shrimp, and bloodworms should be offered.

However, this will vary depending on the fish species’ dietary needs. For instance, herbivorous fish will need a lot of plant matter in their diet.

Can I Feed My Fish Bread?

No, you shouldn’t feed your fish bread under any circumstances. Doing so can put their health at serious risk. Bread contains gluten and yeast, which fish cannot digest properly. It also contains a lot of sugar, which is unhealthy for fish.

In addition, bread soaks up a lot of moisture when it is wet, causing it to expand significantly (often up to 1.5 times its original size). If a fish eats bread, it will continue to increase in size in the stomach, which can lead to severe bloat and swelling in fish.

Is Bread Good/Bad for Fish?

Bread is bad for fish – there aren’t any benefits to feeding it. Bread contains a lot of fat and carbohydrates, so it doesn’t offer much nutritional value.

Fish require a variety of nutrients in their diet to stay healthy, so bread won’t sustain them for very long, if at all. In addition, feeding bread to fish can lead to choking, bloating, intestinal blockages, constipation, and other digestive issues.

What Happens If Fish Eat Bread?

When a fish eats bread, it will almost double in size in their stomach as bread is highly absorbent. This blocks off the large intestine, making it difficult for your fish to pass feces.

As the bread expands, it causes your fish’s stomach to swell up. Not only is this uncomfortable for your fish, but it can also lead to constipation and even death if they are unable to empty their bowels.

Why You Shouldn’t Feed Fish Bread

Alongside being plain unhealthy to fish, feeding bread to your fish can result in serious health consequences, including:

The yeast in bread can cause extreme bloating of the stomach in fish, which is one of the main reasons why you should avoid feeding it. Yeast is used in bread to make it rise, so just think about the effects this can also have on a fish’s belly!

Fish can’t process yeast or gluten, causing both substances to swell inside your fish’s body. This can be very painful for fish, as well as lead to lethargy and constipation. In some cases, it can lead to a ruptured stomach and death as a result.

As fish can’t digest bread properly, it can block off their large intestine and cause constipation. If your fish is unable to pass waste for a substantial amount of time, it can be fatal.

Signs of constipation in fish include lethargy, clamped fins, a swollen belly, and either a lack of feces or stringy poop.

Another problem that can occur if you feed your fish bread is a reduced metabolism. Your fish’s system will start to slow down as all of their energy will be directed to digesting the complex carbohydrates in the bread.

A lower metabolism will affect your fish’s ability to eat and digest food, as well as lead to sluggishness and nutrient deficiencies.

Feeding bread to your fish can quickly pollute your aquarium water, especially if uneaten pieces fall to the substrate and aren’t removed.

As bread decays, it will alter your water parameters and lead to ammonia spikes. Ammonia is toxic to fish, even in small quantities, so it can quickly wipe out a tank if it isn’t removed.

In addition, bread has a habit of dissolving in your water and breaking up into tiny crumbs, making it even harder to clean up in your tank.

The best way to remove ammonia in a tank is through water changes. Ammonia removal products can also help eliminate this compound for a short time.

Poisoning from bread can occur when your fish is constipated and can’t pass waste. Over time, the feces build up to the point where they can poison your fish. When this happens, your fish will be very lethargic and will eventually die.

Yes, bread can kill fish if it expands in their stomach and prevents them from passing feces.

While some hardy fish may be able to survive after eating bread, most will suffer from serious health issues. It simply isn’t worth the risk!

Biscuits and cookies should not be given to fish as they are high in carbs, fat, and sugar. In addition, they usually contain gluten, which fish are unable to digest.

Can a Betta Fish Eat Bread?

No, a betta fish can’t eat bread as they are unable to process yeast, gluten, and carbohydrates.

Furthermore, betta fish are carnivorous, so they need a lot of protein-rich foods in their diet. Betta pellets and live or frozen bloodworms, black worms, brine shrimp, and mosquito larvae are good food options for this species.

Can a Goldfish Eat Bread?

No, a goldfish cannot eat bread as it can be very harmful. Goldfish are omnivorous by nature, so offer them a mixture of meaty foods and vegetables.

What Fish Will Eat Bread?

Most fish will eat fish if they are offered it as they are opportunistic feeders. However, just because a fish will eat bread, it doesn’t mean you should feed it to them.

Bread and any other foods that contain gluten or yeast (pasta, cookies, cake, etc) are incredibly unhealthy for fish and can make them sick.

Can You Feed Pond Fish Bread?

You shouldn’t feed pond fish bread, even stale bread, as they won’t be able to digest it. In addition, bread can harm other animals in the pond, including ducks and geese.

What Do Fish Eat in the Wild?

Carnivorous and omnivorous fish normally eat insects, worms, crustaceans, fish eggs/fry, and other fish in the wild, as well as some plant matter. Large species of fish may also eat turtles, frogs, rats, and snakes.

Herbivorous fish, on the other hand, typically eat plants, algae, and other debris.

What Human Food Can Fish Eat?

Fish can eat vegetables like carrots, zucchini, romaine lettuce, cucumber, and seafood like white fish and shrimp. Some aquarists that own goldfish and koi feed their fish cooked oatmeal and rice from time to time.

What Food Can Fish Eat?

The type of food fish can eat depends on their dietary needs – carnivorous/omnivorous fish like the electric blue ram require food with a lot of protein, whereas herbivorous fish like otocinclus require algae and plant matter.

Freeze-dried fish flakes and pellets are a great choice for fish that need protein, as well as frozen and live foods like tubifex worms, brine shrimp, black worms, and bloodworms.

Veggies, algae wafers, and brown or green algae that grow in your aquarium are good picks for herbivorous fish.

What Should You Not Feed Fish?

Alongside bread, there are other foods you should avoid giving to your fish. This includes pork, beef, poultry, carb-rich foods, sugary foods, and foods high in fat.

Most meat has a high-fat content, and fish need very little fat in their diet. Regular feeding of meat and other fatty foods can lead to digestive problems and a fatty liver.

If you want to give your fish a treat, try frozen shrimp, brine shrimp, bloodworms, and black worms (if they’re carnivorous or omnivorous).

Herbivorous fish can be given leafy green veggies and algae wafers.

So, to sum everything up, if you’ve ever wondered “can fishes eat bread?”, the answer to that question is a straight no.

Bread can cause serious health issues in fish as they can’t process either gluten or yeast. Feeding bread to your fish is likely to make them sick or even kill them in severe cases.

If you run out of fish food, veggies, and frozen seafood (if your fish is omnivorous/carnivorous) should tide your fish over until you can get them some new food.