A lot of people love Clownfish and would like to add them to their aquariums. They are bright and attractive. 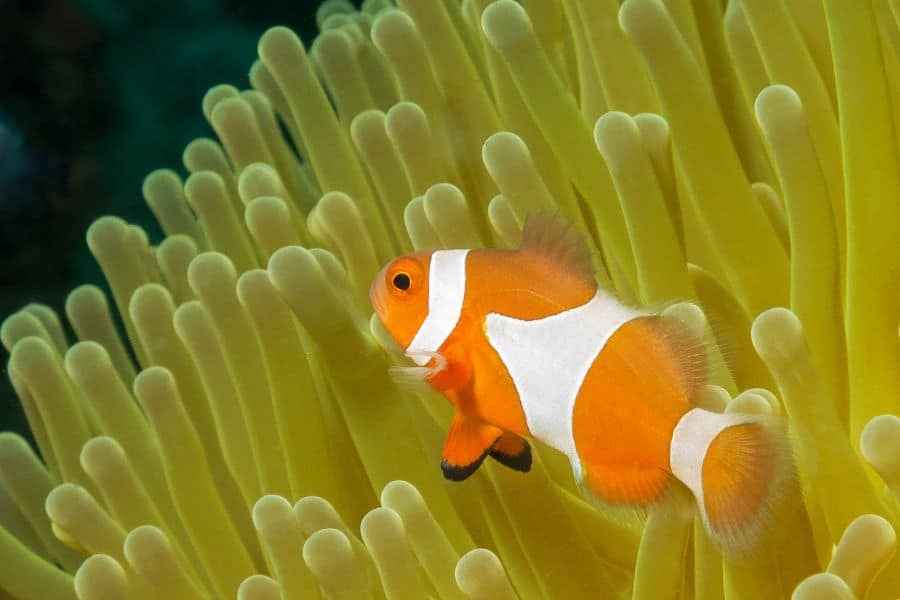 With that in mind, let’s find out whether you can add a Clownfish to a freshwater aquarium!

Can You Keep A Clownfish In Freshwater?

Unfortunately, Clownfish are strictly saltwater fish. You cannot put one in a freshwater aquarium, as it will quickly die.

Clownfish live on reefs in the ocean, or sometimes in lagoons, mostly in the Indo-West Pacific Ocean. They are also found in northwest Australia, Taiwan, Indonesia, and other places.

If you put a Clownfish in freshwater, it usually dies within a few minutes. This is because the Clownfish’s body is not designed to cope with freshwater.

Clownfish cells are semipermeable, meaning that water can pass from one side of them to the other. Water molecules will move toward the saltier side, in a process known as osmosis.

A lot of water will enter the fish’s cells; far more than the fish can handle. It cannot prevent this from happening.

Unfortunately, this will inevitably lead to the death of the fish. It is very unpleasant to watch, and can even lead to the fish exploding.

You therefore must not put a Clownfish in freshwater. Osmosis will quickly kill it.

You can learn more about osmosis here if you’d like a more visual explanation of it.

What Salinity Does A Clownfish Need?

A Clownfish must have a salinity level between 1.02 and 1.024, so it’s quite specific. You must not let the level significantly drop or rise, or the fish will go into shock.

If this happens, you might see your Clownfish swimming erratically, struggling to stay upright in the water, or gasping on the surface.

Other symptoms include lethargy and lack of appetite. These symptoms usually worsen quickly, and the Clownfish will die.

This can happen in as little as a few hours, so it’s very important to protect your fish. Do not put a Clownfish in freshwater, or add freshwater to your aquarium.

What Happens If You Add Freshwater To A Saltwater Aquarium?

If you are an inexperienced hobbyist, there are some major risks associated with cleaning and maintaining a saltwater aquarium. One of the biggest risks is accidentally adding freshwater to your aquarium by mistake.

It’s not hard to do this if you are distracted while cleaning your aquarium. You might only be adding a small amount to do a small water change.

Filling a container from the tap and then adding it to your aquarium without remembering to make it salty can happen. However, this is a serious issue.

Even if you only add a small amount of freshwater to your aquarium, you will be changing the salinity abruptly. This will upset the fish and may start triggering the osmosis process described above.

If you have only added a very small amount, the impact may be minimal, and your fish might be able to cope with the change. However, the more you add, the greater the risks are.

That means you need to make sure that any water you add has a suitable salinity level. You should also be using reverse osmosis deionized (RODI) water in your aquarium at all times.

As described in this video, RODI water makes a big difference to your aquarium in the long term. It prevents algae growth and other major problems from occurring in your tank.

You still need to add salt to your RODI water, however. You will usually be adding about ½ a cup of reef salt per gallon of fresh water.

This will ensure that the water is suitable for your fish, and will help them to stay healthy in the tank.

Are Saltwater Tanks Hard To Maintain?

Saltwater tanks generally require a little more maintenance than freshwater tanks, but they are not much harder. As long as you add suitable salt to the water and keep an eye on the salinity levels, they are fairly easy to keep.

You do need a little more understanding of water chemistry, and there is an additional variable to keep an eye on (the salinity), but this isn’t much harder.

Bigger aquariums, perhaps surprisingly, tend to be easier to maintain. You will need to create a saltwater aquarium if you are going to keep Clownfish, or any other saltwater species.

As with any fish-keeping, it’s important to do thorough research before you set up an aquarium and purchase fish for it.

Are There Any Freshwater Clownfish?

There are no freshwater Clownfish. This species is exclusively a marine fish, and it is only found in saltwater.

That means you cannot add Clownfish to your freshwater aquarium. You will have to find other species to stock it with.

However, there are some freshwater fish that look a little like Clownfish. These may be a good alternative if you would like those bright orange, black, and white stripes in your aquarium.

Some of your options include:

A Bumblebee Goby is often the best alternative to a Clownfish. It can survive in either freshwater or brackish tanks, and it’s a reasonably hardy fish with beautiful stripes.

They are not as bright as Clownfish, but they do carry black and yellow stripes that are somewhat akin to a Clownfish’s colors. 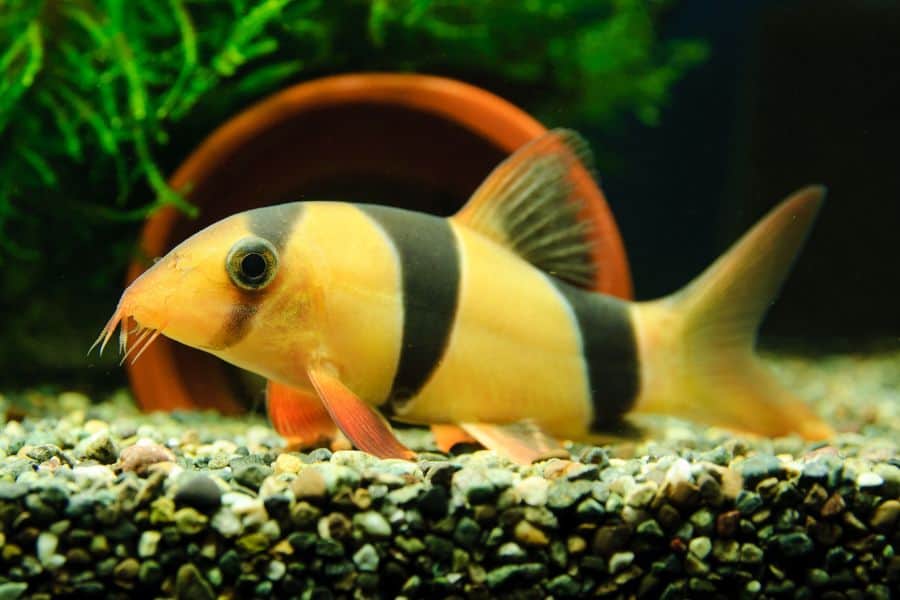 Another option is a Clown Loach, which is a bright orange and black fish. It doesn’t have the striking white of a Clownfish, but as the name suggests, it looks pretty similar!

These fish can live for 10 years or more, and they are unique enough to really stand out in a tank. They generally get along well with most other tank inhabitants. 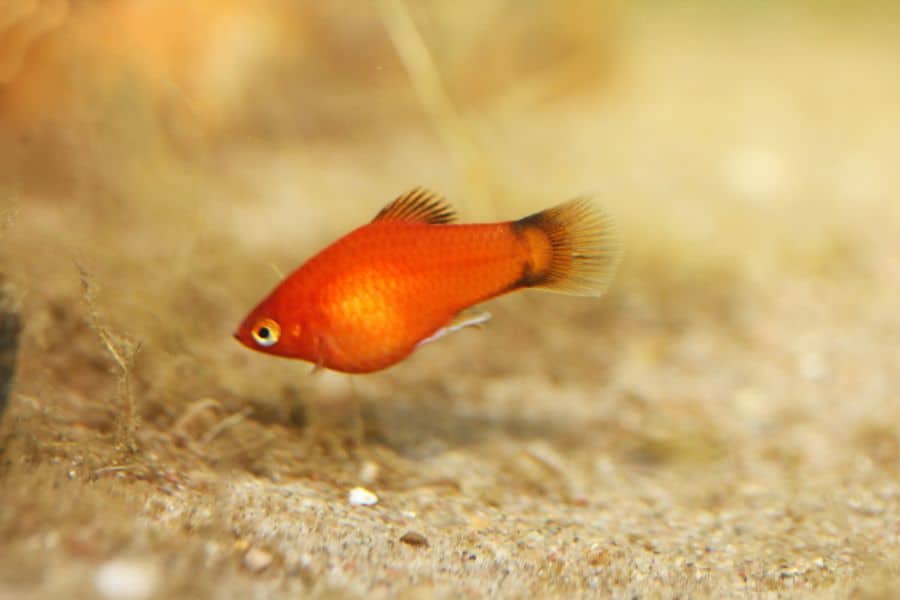 Another bright freshwater option, Platies are usually just orange. That makes them less attractive than Clownfish, but does add a splash of color to your aquarium.

They get up to around 3 inches long, so they are good in small tanks. They do only live for around 3 years, but they are easy to look after and they will get along well with other fish.

Platies like a temperature range between 70 and 77 degrees F, and prefer a pH level between 6.8 and 8.0.

Some varieties of Platies are more colorful than others, but be aware that the prettier ones tend to be more expensive. They are a group fish, so should not be kept individually. 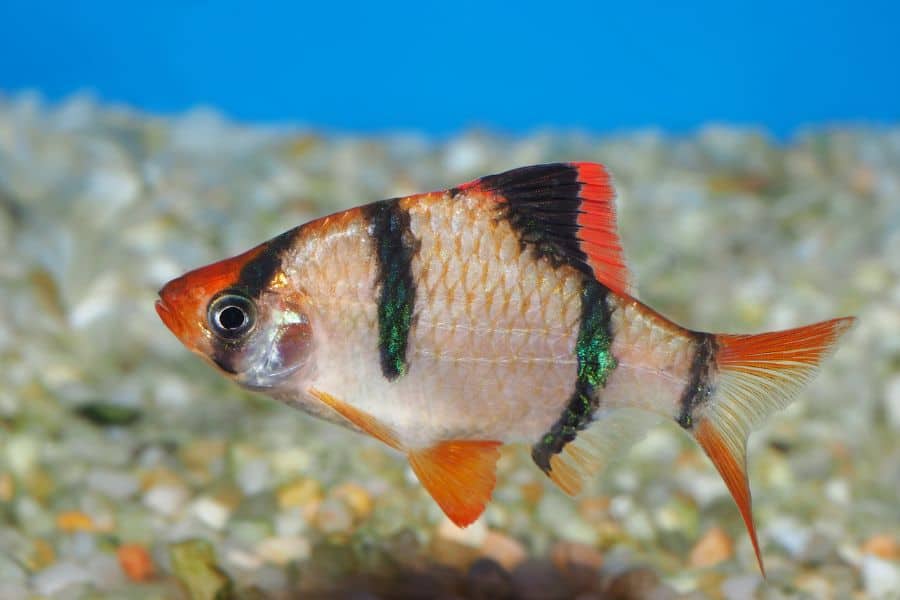 If you really like the Clownfish’s stripes, a Tiger Barb could be a good alternative. These fish don’t have as much orange on them, but they do offer the black and white stripes that catch the eye.

They like a pH level of around 6.5, and temperatures between 68 and 79 degrees F. there are quite a few color variations to choose from.

These fish are generally easy to care for, and are very attractive additions to any freshwater setup.

Adding Clownfish to a freshwater tank is not a good idea; they will not be able to survive. Clownfish must be kept in saltwater, and being exposed to freshwater for even a few minutes is likely to kill them.

If you wish to keep Clownfish, you must set up and maintain a saltwater aquarium. If you have a freshwater aquarium, consider some of the above alternative fish instead!