Betta fish and goldfish are some of the most common fish species one can choose to place in an aquarium, but perhaps you’re not sure whether they can be placed together in a tank.

In this article, we’ll look at the similarities and differences between the behaviors, diets, and habitats of these two fish species to determine if they can live together. 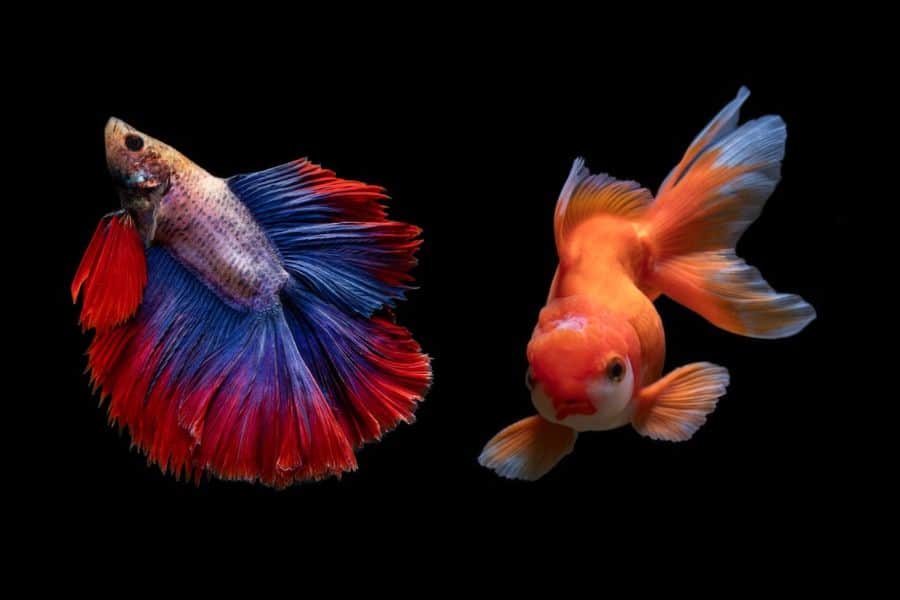 Though there are actions you can take to have them together, betta fish and goldfish are typically not advised to be placed together in one tank mainly due to differences in their habitats and diets. Goldfish are also known to produce an abundance of waste, the result of which can harm your betta fish.

Before we go into the details, let’s first take a general look at the two species so that you know what kind of fish you’ll be handling. 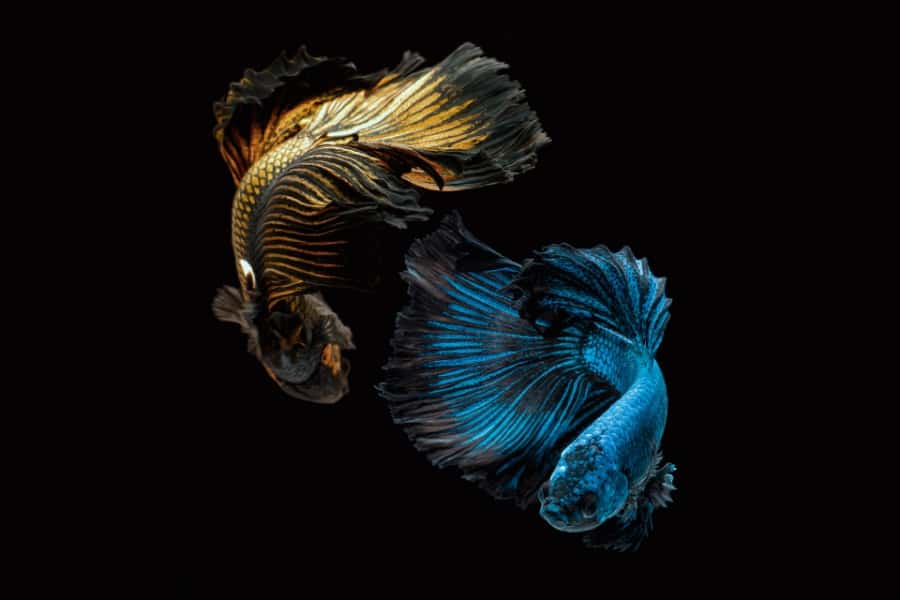 Betta fish, otherwise known as Siamese fighting fish, are a tropical fish species originating from southeast Asia. Though there are 73 types of betta fish, most are bred in captivity and are bred in specific ways to give them all very brilliant colors on their bodies and fins.

Betta fish come in a variety of colors, ranging from common colors such as red, blue, and black, to rarer ones such as metallic, copper, and turquoise, with some, even being multicolored. They also come in a range of tail shapes that typically fan out, such as the veil, spade, and delta varieties.

Betta fish are native to the river basins of Chao Phraya and Mekong in Thailand, where they inhabit shallow water such as those found in marshes, floodplains, and rice paddles.

Betta fish consume only animal matter, such as insects, their larvae, and their eggs from the water’s surface. 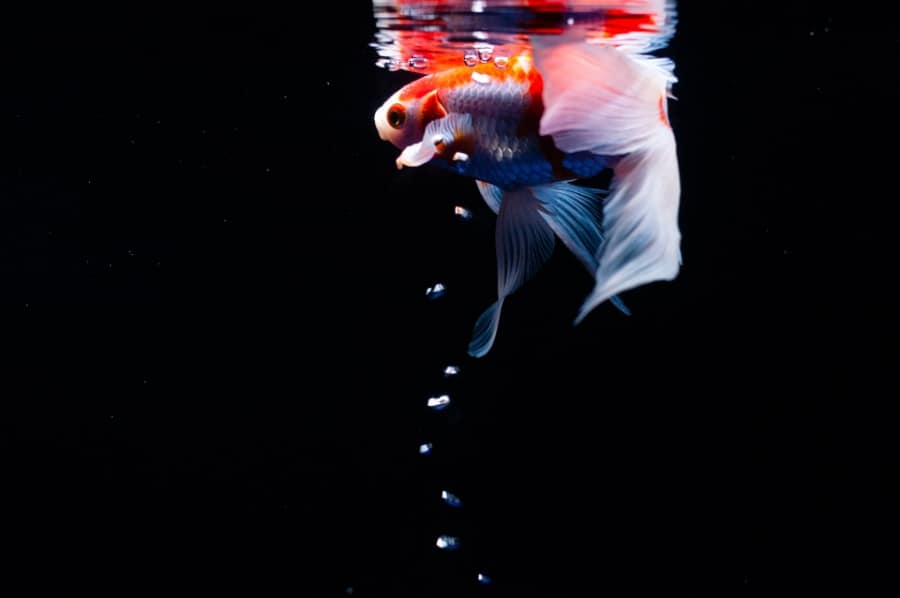 Goldfish are one of the most popular pet fish species around the world, found in nearly every pet store you may come across. They originate from Central Asia and have now evolved to have over 125 types, all of which have been bred in captivity.

Goldfish are mainly orange-gold in color, but some can appear whiter with orange or black spots. They may also have different tail shapes such as the butterfly or peacock tail type.

Typical habitats for goldfish include areas of slow-moving water, such as rivers, ponds, lakes, and ditches. These are typically located inland and in wetlands in temperate regions.

Goldfish are omnivores that consume a combination of animals and vegetables, examples of which can include small plankton (i.e. daphnia), freshwater shrimp, algae, and scalded peas.

Here’s a comparison table between betta fish and goldfish regarding their behaviors, diets, and habitats:

Table 1: A comparison between betta fish and goldfish in regards to several lifestyle factors

Now that you have a general idea of the similarities and differences, let’s take a closer look at some of these in detail.

What Water Temperature is Most Suitable for These Fish?

Goldfish, on the other hand, prefer temperate habitats with their slightly colder water temperature. Typically, the best temperatures for them would be between 68 °and 74°F.

Unlike bettas, goldfish are not as picky when it comes to water temperature, and can survive in temperatures beyond their optimal range (they can go as low as 32 °F or as high as 95°F).

What pH is Most Suitable for These Fish?

Will They Be Able to Live Peacefully?

Ask anyone to describe betta fish and one of the first words you’ll probably hear is aggressive. Betta fish are known to attack just about any other fish sharing a space with them, including each other.

Goldfish, however, are known to be peaceful animals that usually have no problems swimming with each other and with other fish species.

Do Their Diets Overlap?

Betta fish and goldfish diets do overlap to a degree, as both consume meat. However, only a portion of a goldfish’s diet contains meat, while the entirety of a betta fish’s diet consists of meat.

Betta fish are carnivores, and therefore depend almost completely on meat and excess protein, and rarely will ever include plants in their diet. This can be seen in their digestive system, as even their digestive tract is designed to process the additional protein.

Goldfish are omnivores that consume a combination of meat and plants. Algae are a major part of their diet, along with other plankton and aquatic plants.

Feeding betta fish food to goldfish and vice versa can have detrimental impacts on both fish species’ health. And although betta fish may enjoy the presence of plants in their tank, they will never consume them, unlike goldfish.

If you’re basing your decision on whether these two fish species can live together by looking at their diets, then no, they would not be a good fit.

Also Read: What Do Goldfish Eat?

Do They Enjoy Similar Habitats?

Though both betta fish and goldfish live in freshwater, they each have their preferences when it comes to décor and doesn’t share the same taste. While betta fish prefer tanks that have many artifacts and hiding spots, goldfish prefer tanks with lots of open space so that they can swim around freely.

If you’re deciding whether betta fish can live with goldfish in their preferred habitats, then no, they would not be a good match together.

What Type of Environment Do Betta Fish Enjoy?

As previously mentioned, betta fish is a highly aggressive fish species. Thus, they will spend almost the entirety of their life by themselves.

As such, to satisfy their curiosity and create a sense of comfort and security, it’s necessary to add a variety of toys and decorations to the tank to make them feel at home. Examples of such include shipwrecks, leaves, foliage, and balls.

What Type of Environment Do Goldfish Enjoy?

Though an environment with lots of rocks, vegetation, and other objects may be heaven for betta fish, that’s typically not the case for goldfish.

Unlike betta fish, goldfish are much more social and don’t mind the company of others.

Therefore, while goldfish probably won’t mind some degree of décor in your tank, they mostly depend on each other and other fish for company.

Will the Same Filtration System Work for Both Species?

The same filtration system would most likely not work for both betta fish and goldfish.

Because goldfish are known to produce a lot of waste and ammonia, which can significantly impact the cleanliness of the water and the health of your fish (details of which can be found here), it’s necessary to have a strong filtration system to clean your tank efficiently. This, in turn, will create a very strong water flow that is damaging to the betta fish.

Because betta fish are much smaller in size than goldfish, they are much weaker at swimming and can easily get knocked around by the strong current created by the filtration system.

Will a Betta Fish Kill a Goldfish?

A betta fish will not, or rather, cannot kill a goldfish, mainly due to the size difference. Though the betta fish might become aggressive, their size difference makes it so that it can probably only nip the fins of the goldfish, never outright kill it.

Will a Goldfish Kill a Betta Fish?

While betta fish can’t kill goldfish, the goldfish can certainly kill the betta. Though goldfish are docile creatures and won’t attack other fish just for the fun of it, they will try to eat just about anything they can fit in their mouths, including betta fish.

Since goldfish can grow to be quite large, there will most likely come a day when they will try to see if the betta fish can become an addition to their diet.

As goldfish are omnivores, they require a combination of protein and carbohydrates in their food. Betta fish, on the other hand, are carnivores that require a large amount of protein to remain healthy.

Therefore, the amount of protein in goldfish food isn’t enough to support the betta fish’s diet in the long term.

Goldfish can eat betta fish food, but should only do so temporarily and not in large quantities. Though it won’t directly harm goldfish, betta fish food can cause intestinal discomfort.

Goldfish, as opposed to betta fish, have smaller digestive tracts and digest food at a much slower rate. So, even though betta fish food contains many proteins, minerals, amino acids, and vitamins that are beneficial to goldfish, there are simply too many of them for the goldfish’s digestive tract to process.

Because of the number of differences between betta fish and goldfish, including some that can seriously impact the health and well-being of either of the fish, it’s not preferred that these two fish species live together.

As long as you provide them with suitable habitat and water conditions, betta fish couldn’t be happier living on their own.