The last time I visited the pet shop, I noticed that betta fish are individually placed in a small 1-gallon tank equipped with a lighting system, filter and live aquatic plants. Despite being solitary, they look happy as water condition and feeding is well taken care of.

But on another occasion, what I witnessed was worse. 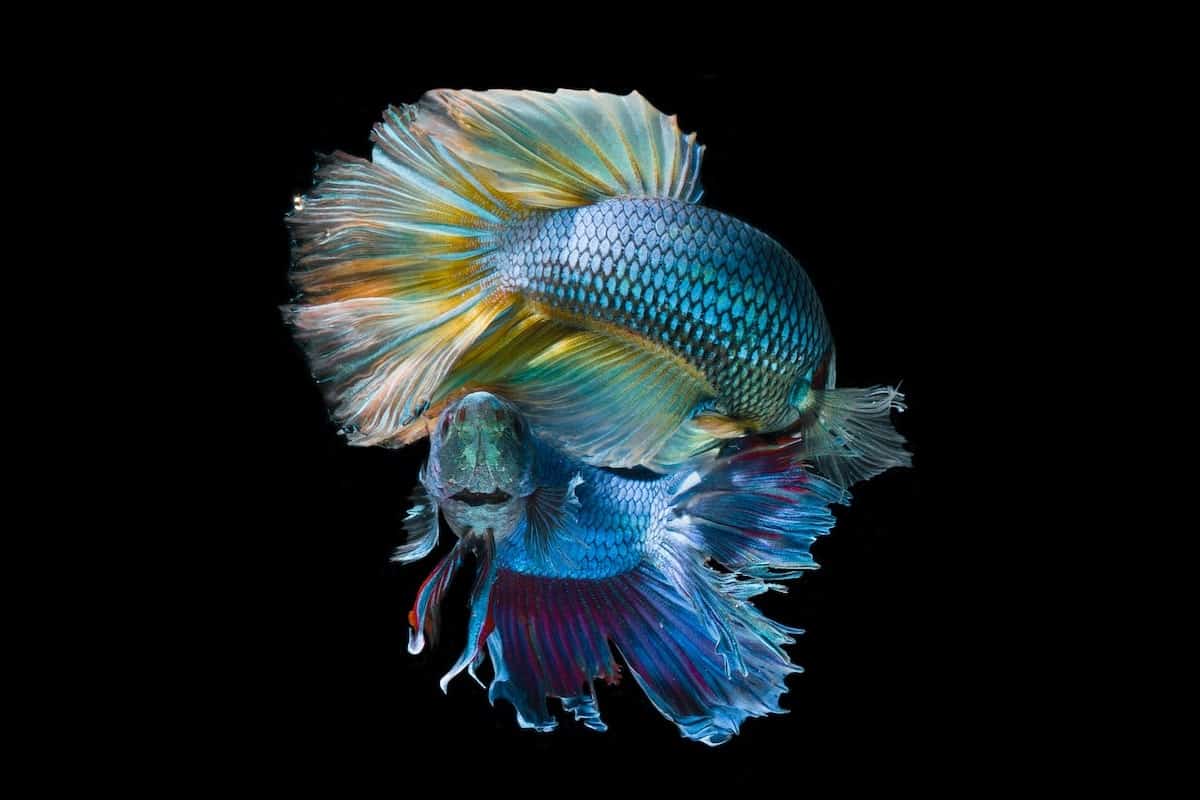 I visited my friend and I was so sad when I saw his betta fish. It was placed in a small plastic cup with very little water, bare naked without plants, beds, filter and aeration.

All throughout my visit, the fish was lying motionless at the base of the cup. It was the epitome of loneliness for a betta fish.

With these 2 occasions, you will wonder why betta fish are individually separated from each other. What’s with them and that solitary confinement is synonymous with their species?

Join us in this article as we dive deep into the traits and habits of this splendid freshwater fish.

Also known as siamese fighting fish, betta fish are small in size ranging only from 5 to 8 cm long. Their entire body is brightly colored with fins that are intricately long.

Originating from the Mekong river in Thailand, Betta fish are usually found in floodplains, marsh, rice paddies and other shallow stagnant water. They are classified as omnivores and they feed on both plants (particularly roots) and animals (mainly insects).

Betta fish are facultative air-breathers. Meaning, when they are taken out of the water, they can breathe in air. But only for a short amount of time.

Sexually Dimorphic: The Difference Between Male and Female Betta Fish

Differentiating between males and females of a particular fish species is often difficult. Most of the time, the males look physically the same as the females.

For betta fish, you can easily differentiate and identify their sex since they exhibit sexually dimorphism.

Quick fun question: The betta fish that we mostly see are brightly colored with long decorative fins. Is this the male or female of their kind?

Female betta fish are generally small, dull in color and don’t have long fins. On the other hand, male betta fish are large, brightly colored and their fins are relatively long. The reason for the long fins in males is that they use it to display their health and attract females during mating.

Aggression and Beauty: The Basis of Their Name and Breed

The scientific name of betta fish is Betta splendens. Scientifically, their name is derived from 2 languages, namely: “enduring” in Malay and “shining” in Latin. This is supplemented with the belief that they are named after the aggressive Asian Bettah Warrior Tribe.

Betta fish are both aggressive and beautiful. These particular traits have been isolated for breeding. Today, over 70 varieties have been bred in captivity, like the delta, crowntail, veil and double tails.

Fun fact: Betta fish belong to the gourami group which is also known as an aggressive family of fish. 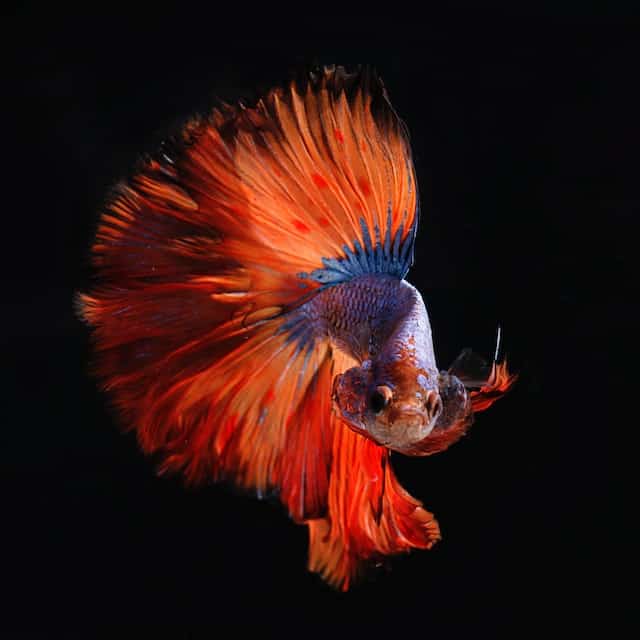 As far as the betta fish family is concerned, it is only the males that show aggression. Males hate their own kind and this heated relationship has been termed as male-vs-male aggression.

Their aggression towards each other is so intense that you need to individually separate them. Even in glass-divided tanks (also called as fish condominiums), males show their mighty aggression to the male next door by flaring. Aside from extending their fins, they display their aggression by pushing out both gill covers making them larger in appearance.

This is the reason why you cannot place 2 male betta fish in the same tank. In the event you do this or remove the glass division, then you can expect intense physical interaction where the results are often fatal.

A common male betta fish fight includes ramming, body biting, fin nipping, lip locking and body wrestling. They do this until one succumbs to their injury.

While male betta fish are genetically wired to fight, there are reasons that trigger their aggression.

In a wild setting, when a male betta fish swims into another male’s territory, it will start with a show of aggression by both males. Since there’s plenty of room in the wild, the invader will usually retreat away, thereby preventing the escalation of a full fight.

This is a different case in a tank setting where space is limited. Instead of swimming away, both males are locked into fighting.

This is also the reason why you cannot have 2 betta fish in 1 bowl. The restricted space of a fish bowl overlaps their territory.

Territory defense by males is further enhanced during mating and breeding season. It is the males that guard the eggs.

After the eggs are laid and fertilized, the male will collect them in a floating bubble nest. Constantly staying under the nest, the male will intensely guard the floating nest against predators.

When you sprinkle food over a glass-divided tank, male betta fish become agitated. They try to reach out for their neighbors’ food even if the glass prevents them from invading.

If a male betta fish just fights over without a reason, how much more if the reward of their fight is a beautiful mating partner.

Research shows that isolated breeding of males can enhance their stamina and aggression. This has been proven in fish fighting events where isolated-bred males are more aggressive and last longer in the tournament. 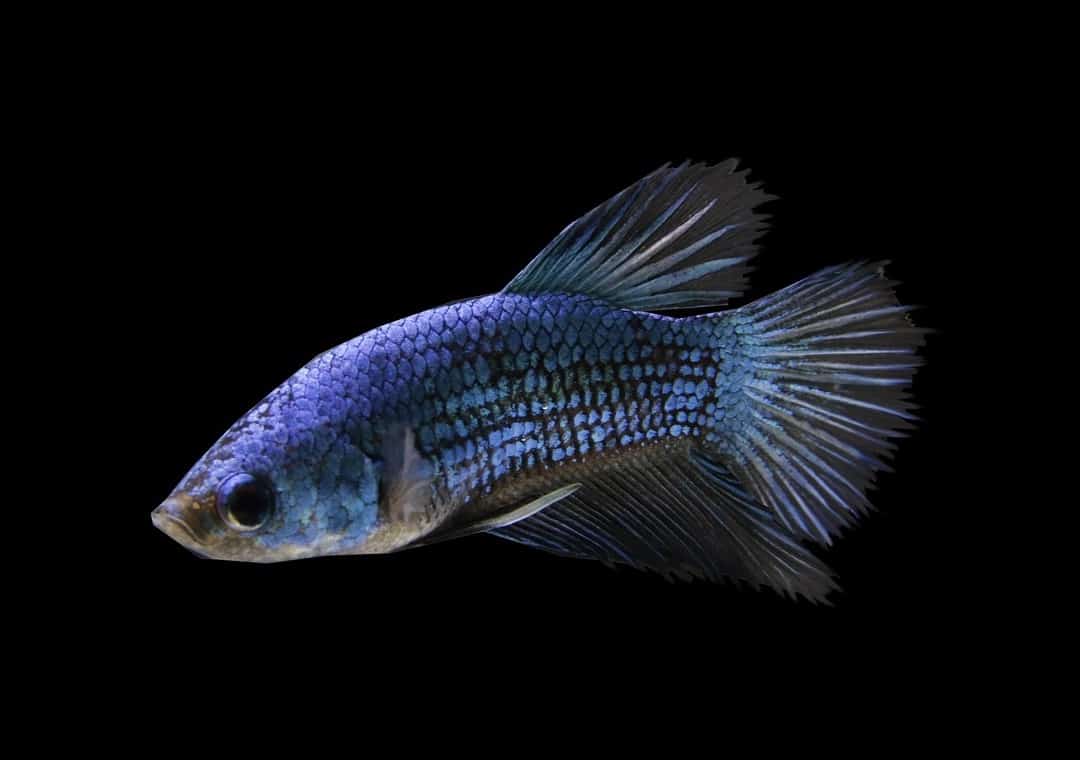 In general, female betta fish are not aggressive. They are calm towards the males or their fellow females.

This is the reason why a small group of female betta fish can be simultaneously kept in the tank. They socialize amongst themselves. They can even form a group called sorority, school and swim together with a single female as their dominant leader.

In the event that you add a new female into the tank, a fight is expected as the newcomer will often challenge the hierarchy. To this effect, the aggressive female betta fish must be separated from the group.

When it comes to the peacefulness of female betta fish, it does not mean that they do not become aggressive. If the condition calls for a fight (like tight space), female betta fish do fight, may it be against a male or its fellow female.

The number of betta fish kept in a single tank will highly depend on the sex.

For male betta fish, their stocking density is 1 fish for every 20 gallons of water. If you have a large tank, you can simultaneously keep 2 male betta fish. Provided, each male is provided with its own hiding place that is situated opposite to each other.

For female betta fish, a 20-gallon tank can be stocked with 6 fish. While females tend to socialize, school and swim together, it is best that your tank is well furnished with live aquatic plants.

Keeping both male and female betta fish in a single tank is possible. Provided that it is large enough that the female will not intrude the territory of the male.

The practice of placing both male and female betta fish in a single tank is only recommended during mating. After the eggs are spawned and fertilized, you should remove the female. This is when the male builds a floating nest which will become its extended territory.

Betta Fish Fighting and Their Association to Gambling

Since the 14th century, betta fish have already been bred. Surprisingly, the main reason why they are bred is not because of their aesthetic beauty. They were bred to fight.

Initially, it was a form of entertainment. However, as money is being introduced, betting has led this sport to become a form of gambling. In its original hometown in Thailand, betta fish fighting has become so popular that it was taxed and regulated in the 1800’s.

Today, betta fish fighting is banned. Aside from being a form of illegal gambling, it is inhumane for the fish. Just imagine this: you placed so much time and effort in breeding them and just allowed them to die in a fight. If this is the case, then you defeat the purpose of being an aquarium hobbyist.

We are hypocrites if we say underground betta fish fighting does not exist today. They do exist. In fact, they have a secret governing body that controls the back door operation of the games.

If you encounter an underground betta fish fighting event, please do not hesitate to report it to the authorities. Organizers should be worried as fines and penalties are stiff, including time behind bars.

Without a doubt, betta fish are aggressive. Their behavior calls them to be isolated. But for me, instead of focusing on their aggression, I’d rather dwell on how elegant this species is.

If they need to be isolated, then why not. But I make sure that while they are alone, I will provide them with a decent home.