Can you remember your last visit to the pet shop? Have you observed why angelfish and goldfish are kept in separate tanks?

Biologically and ecologically speaking, angelfish and goldfish are 2 different species that require a unique habitat to survive and flourish. 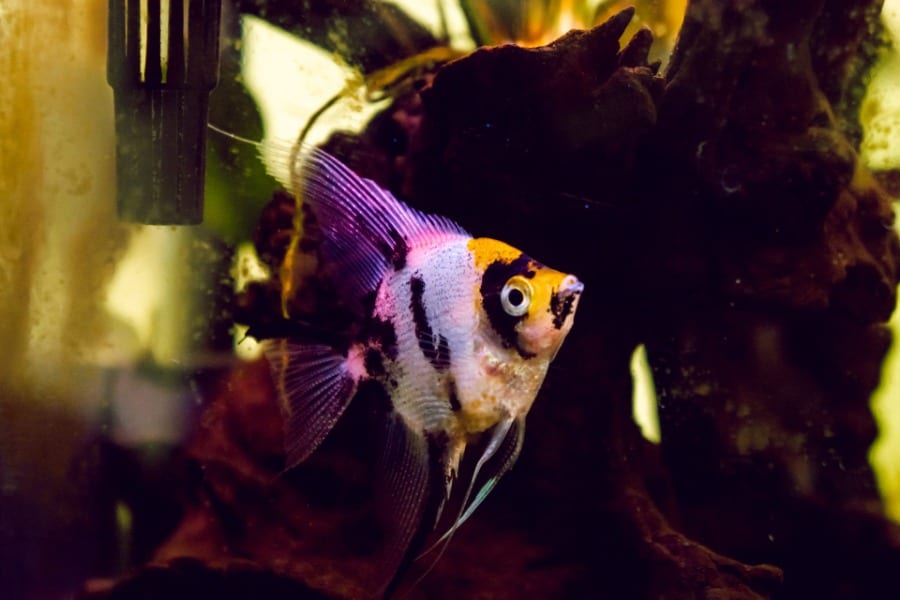 If you put them together, it can be fine in the beginning. However, as time goes by, you will observe that one will dominate and the other will succumb. But why?

Join us in this article as we dive into the facts as to why angelfish and goldfish don’t mix.

Comparative summary of the differences between an angelfish and a goldfish:

The Difference in Their Climate Zone

If angelfish and goldfish are placed in the same tank and if (and only if) they can talk, it would either be that the angelfish will be saying “this is too cold for me” or the goldfish saying “it’s hot in here”.

Kidding aside, this is due to the difference in their living habitat. According to Fishbase, angelfish are tropical species and can live in water temperatures between 24 – 30°C (75 – 86°F).

On the other hand, goldfish are subtropical species and they naturally thrive in waters with temperatures anywhere from 0 to 41°C. (32 – 106°F)

Fortunately, modern farming techniques for aquarium fish breeding have allowed acclimatization to occur. These species can now adapt to a wide range of thermal environments.

Moreover, home aquarium equipment (like a thermostat) can easily be purchased and can assist you in regulating your tank’s thermal surroundings.

Tank Dimension: Heights for Angels vs Wides for Golds

Though you can easily address the difference in water temperature requirement between species, we need you to focus on the dimension of the aquarium.

A key factor expert aquarists use in keeping angelfish and goldfish in the same tank is the dimension of the aquarium.

You have to be aware that angelfish and goldfish have different body shapes, the latter being round while the former is laterally compressed or flat on both sides. This means that if they are going to live in a confined space, it should be appropriate to their body shape.

Although any tank dimension will do for goldfish, they best thrive in wider tanks. Aside from having ample space for their round bulging bodies, goldfish tend to swim at the surface. Apart from being occasional surface feeders, goldfish gulp in air at the surface, especially when dissolved oxygen level drops to a minimum.

A 30-gallon aquarium (30x12x16”) is a great starter kit for newbie aquarists. In the case of angelfish vs goldfish, it should be a single species-only tank.

It would be a disaster if you combine angelfish and goldfish, especially in a smaller tank as both species compete for space and food, which if compromised, can lead to stress and trigger behavioral changes like aggression.

For an angelfish-only tank, the ideal stocking density is 5 to 8 individuals for a 30-gallon tank. This gives them enough space to horizontally and vertically swim. If you stock more fish, the tendency is, even if they belong to the same species, they will be aggressive towards each other.

For goldfish, the ideal stocking density is 1 fish for every 10 gallons of water.

If you are following our advice on having a single species-only tank with the right stocking density, then expect that your fish pet will be healthy.

A good indicator of a healthy fish population is the schooling behavior where fish tend to swim together in one direction.

Contrary to good stocking density, if you overstock and keep more fish, then expect oxygen depletion to happen coupled with increased levels of nitrite and ammonia due to more fish waste excreted.

As of this moment, you may be thinking of lowering the stocking density while keeping both angelfish and goldfish. Many have tried that setup, including me. However, the results are not as lively as expected.

Do you still remember we mentioned earlier that it can be fine in the beginning but will change afterward? The moment you stock both angelfish and goldfish in the tank, their behavior may be friendly towards each other.

However, as they compete for space and food over time, they become territorial, especially angelfish. This is the reason why angelfish prefer to stay within the confines of aquatic plants.

Aggression can also be triggered. Goldfish are highly dominant when it comes to feeding. Their voracious eating habits cause stress to the angelfish, which in turn, can provoke aggression. Angelfish aggression is further heightened when the tank is small or during the breeding season.

Fin nipping is often the result of aggression or when conditions are compromised.

For angelfish, when they are stocked in a small tank, their elongated fin can be damaged during the bottom feeding of goldfish or when they ascend to the surface to gulp in air.

For goldfish when they come close to a territorial angelfish, their soft swaying fins are often nipped by the angelfish. While damaged goldfish fin can naturally heal, it can become serious if nipping persists.

Technically, angelfish can live with goldfish, especially if conditions are perfect for their co-existence. However, attaining these conditions requires extra effort and is not a description of “ease of care” quality which we all want.

Yes, angelfish and goldfish can be kept together. However, it is unorthodox and contradicts the concept of pet care.

At the end of the day, angelfish and goldfish are best enjoyed separately.