These bumblebee-like snails are very attractive with their yellow and dark brown colors. They are known for their ability to eat other snails, making them a great choice for controlling a snail pest infestation. Assassin snails are also carnivores which makes them very safe for live plants. 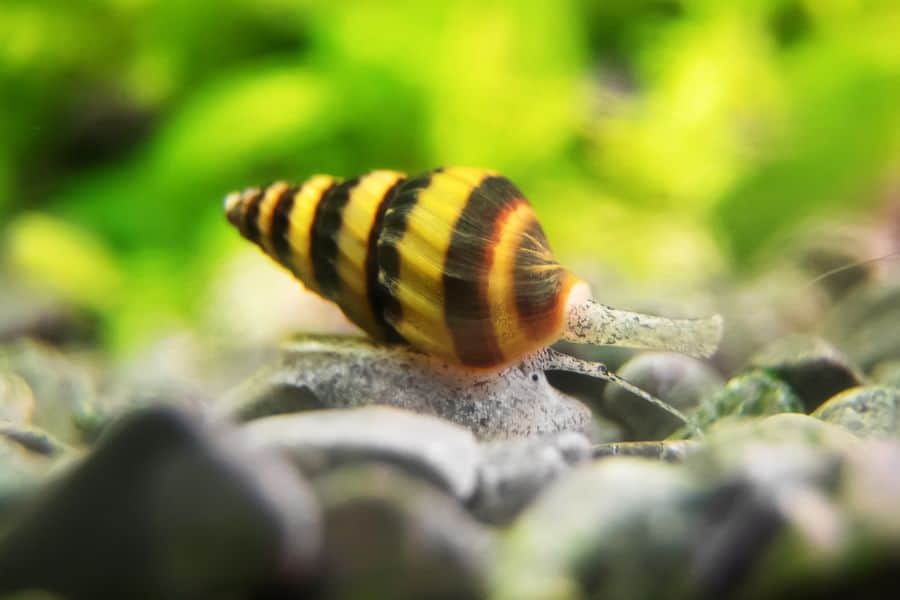 Read on to learn everything about the intriguing assassin snails, from their origins to how they kill other snails and reproduce. Learn about their peaceful temperament and how they will get along with their various tank mates.

Short Summary of Assassin Snails and their habitats:

The natural habitat for assassin snails is a tropical freshwater water fixture like rivers, lakes, and reservoirs. Water temperature is very important to the snails, and anything above 28 degrees Celsius can affect their lifespan and breeding rate.

They also thrive in the soft muddy substrate at the bottom of the water, where they can hide and hunt for food. Here are all the details you need to know about the species:

Assassins live for about two years, but this can be extended up to 3-5 years of age in the most optimal conditions where the snails are well-fed and have a befitting safe & comfy environment.

Most aquatic snails like these have an average lifespan of 1 to 2 years, and it would be best if you plan for them to live that long. 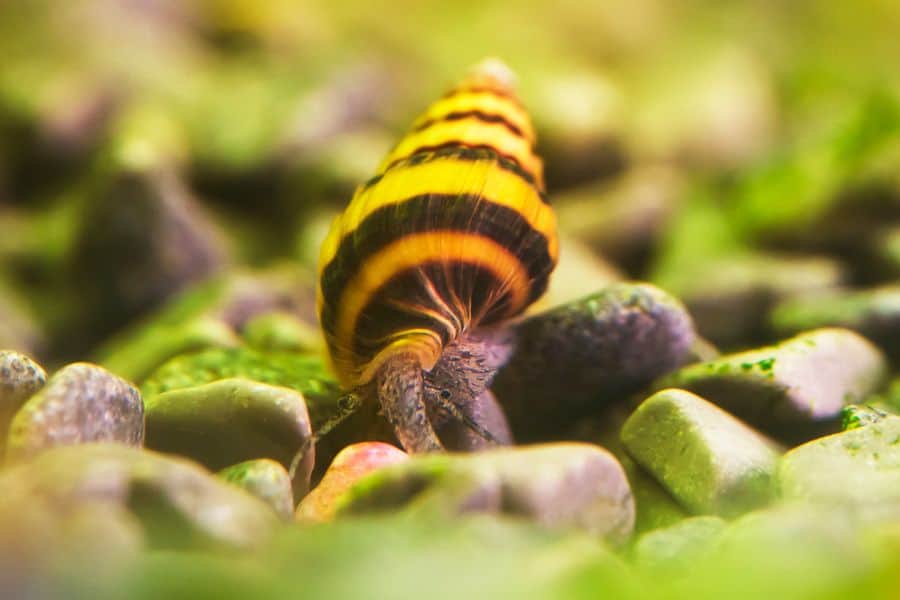 Assassin snails are among the most attractive snails in the wild. They feature gorgeous dark brown stripes spread throughout the goldish-yellow cone-shaped shell. The stripes are wound around the spiral-shaped shell and taper to a point at the rear end. The shell is shaped like a cone, similar to those of rabbit and trumpet snails.

Assassins also feature the prominent operculum that snails use to protect the inner organs in their shells from predators. Snails that have the operculum do not breathe in air. Instead, they use gills to take in air from the water.

Snails that do not have the operculum, like the bladder snail, have an air cavity that helps them breathe in oxygen from the top of the water surface. These air cavities also allow them to swim fast, giving them added protection from predators, an advantage that the assassin snail lacks.

Since the snail has an operculum, it is slower hence more sensitive to water changes and poor water conditions.

Two tentacles protrude from the base of the snail, containing the assassin’s black-dotted eyes.

Another intriguing feature of the snail is the proboscis. The proboscis is a sucking ‘mouth-like’ feature used for prey hunting and feeding. It is where the tongue is located, and assassin snails cannot successfully feed on other animals without it.

When it comes to size, assassin snails typically grow to less than an inch (1/4 to ¾ of an inch). However, in typical conditions, the snails can grow up to 2 inches and maybe 3 inches in rare situations.

Assassin snails are not aggressive, surprisingly, considering they eat other snails.

They are also nocturnal, meaning they can hunt and feed at night. Despite that, assassins are most active during the day.

Assassins disappear from time to time and hide in the substrate to hunt for their food. So, do not be alarmed when you do not see them in the water for a while.

On top of that, Assassins are not that social. Assassins thrive in isolation but do not mind living in a social community tank surrounded by many species and their own kind. The recommended group of assassins in a community is more than five but less than 15.

With all that said, the main concern that most aquarists have about the assassin snail is how they hunt for their prey:

How Do Assassin Snails Kill?

The assassin snail-killing business is brutal and yet a sight to behold. This is because assassin snails do not use poison or toxins to subdue their prey; instead, they capture the prey physically and eat them alive.

The assassins have a siphon, a long tube that protrudes from the snail’s front. Its function is to help the snail locate its food in the vastness of the aquarium by swinging from side to side.

The siphon also acts as a breathing tube when the snail is submerged. It is used to inhale water into the snail’s gill cavity, where the water is spread over the gills for respiration.

Back to killing. Once the food is located by the siphon, the snail uses its strong foot that is covered in a mucus coating to hold onto the meal. The mucus coating is very sticky, acting like a sort of glue that sticks to the prey, making it virtually impossible for the meal to get away.

The first course of action once the snail has its prey (a bladder snail, for example) is to look for the opening to the shell. Once the opening of the shell (the aperture of the shell) is located, the assassin snail proceeds to use its proboscis to feed on the prey.

All this time, the prey snail is alive. No toxin or poison is injected into the prey to make it paralyzed or unresponsive.

Assassin snails are heterosexual and not hermaphrodites like many gastropods. This means that you will need both sexes for breeding. It is, however virtually impossible to identify which one is male or female; hence a bigger population is recommended to maximize the odds.

Another thing to keep in mind is that assassin snails are slow reproducers. They do not lay as many eggs and the incubation period for their eggs is longer than other snails.

The assassins mate for hours. Females eventually lay a few eggs in almost translucent capsules containing one egg each. This is a low birth rate since other species lay 40 to 300 eggs at a go.

Other species’ eggs float on the water surface, but the semi-transparent rectangular enclosures of the assassin snail eggs collect on hard solid surfaces from the glass walls to the décor, hardy surface, and rocks.

The few eggs then take a long period to hatch (about 4 – 8 weeks of incubation) instead of the 2-4 weeks in most snail species. Eggs turn from yellowish to a brownish color in a couple of days, then hatch after two months.

This makes them a hard species to infest your tank. That is why they are highly recommended for dealing with a pest infestation.

One last thing to note about the breeding rate of the assassin snails is that the baby assassins take up to six months to reach their sexual maturity. This implies that the newly born won’t be able to actively reproduce until six months after their birth.

Caring for an assassin snail is easier than for other species like the nerites or the mystery snails. This is owed to their limited reproduction, diet, and temperament.

The only concerns that you will want to pay attention to is the tank size, tank mates, water parameters, and diet.

Have an aquarium size and décor that allows for exploration and adventure for the snails to remain active and never get bored. Recommendations include a fine substrate (like sand) where the snails can hide to hunt for other snails or meat leftovers.

Other non-fish species that are compatible include the Asian Gold Clams, Viper shrimp, ghost shrimp, Amano, bamboo, and other freshwater clams.

Despite their compatibility, assassin snails do eat some shrimps if they are not larger than them. An example is a dwarf shrimp. If the snail can fit the shrimp in its mouth, then you can bet the shrimp won’t survive for long.

A good precaution to avoid such incidences is to ensure your snails are well-fed. Shrimps and other non-snail animals are a last resort meal for assassin snails.

Assassins are very sensitive to water changes. You will first need to beware of the water changes from the shipping bag/container to your aquarium tank and any acclimation you may need to do for breeding.

Ensure you first acclimate the assassin snails by suspending them in your fish tank for more than 15 minutes before introducing them to the main tank.

Assassins also prefer top-notch water quality without pollutants like copper, which is extremely dangerous for snails.

Water parameter stability is more important than ideal parameters. So it would be best to aim for the following ranges:

Assassin snails survive on a high-protein carnivorous diet. As carnivores, the assassin snails are no danger to your live plants and will only nibble on them when they spot meaty leftovers on the leaves or a dead fish lying there.

The Malaysian trumpet snails are the assassin’s favorite diet. You will never have to look for another food source for these snails if you have many trumpet snails in your tank.

So, you may be asking, do assassin snails eat all snails?

Assassin snails do eat larger snails (Mystery snails, Huge Nerites, and Gian Sulawesi Snails) so long as they are able to hunt them down. However, it is important to note that these are the last option for meals after the aforementioned smaller, easier prey. Also, assassins do not eat their own kind or their eggs.

Assassins do, however, feast on other snails’ soft eggs. They also eat fish flakes, meaty fish food, catfish pellets, and blood worms. Dead fish and meat leftovers are other protein sources that starving assassin snails can feed on.

How about shrimp & algae? Do Assassin Snails Eat Algae or shrimp?

Assassin snails do not eat algae. That job is left to Nerite snails and mystery snails, among others. This means that assassins are not good as a cleaning crew for your waste build-up.

Assassins will also eat dwarf shrimps but won’t bother themselves with other shrimp species like the Viper shrimp or ghost shrimp.

When it comes to their diet, one thing to note is that snails are the preferred diet for assassin snails. Other food sources will only be considered if snails are not easily available in the aquarium.

Are Assassin Snails a Good Idea?

Assassin snails are a good idea for any aquarist who is looking into controlling a snail pest infestation by feeding other snails to the assassin.

However, the assassin snails are a bad idea if you put them in a tank that has beneficial snails, like smaller nerites and mystery snails.

Mystery snails and nerite are great for controlling algae and waste infestation. However, they are easy prey to assassin snails. They will get killed for food, and this will affect your cleaning maintenance.

Assassin snails are of no danger to fish, but they sometimes eat fish eggs and newly hatched larvae.

The fish eggs are part of the assassin snail’s protein-rich diet in the wild, and you should keep assassin snails far away from a breeding tank for fish.