Perhaps one day you came across a bristle worm in your fish tank, but without any prior knowledge, you’re now unsure what to do with it.

In this article, we’ll go into detail on what bristle worms are, what impacts they can have on your tank, and what you should do about them if you see them in your tank. 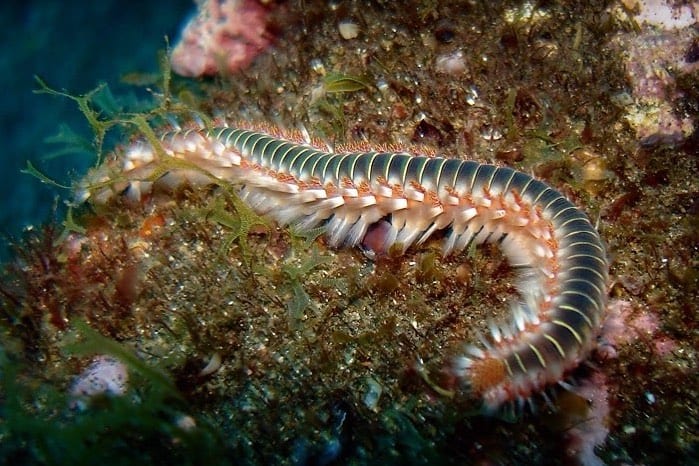 Bristle worms are soft-body annelids found in fresh and saltwater that feed on debris and corals, while they are preyed on by several crustaceans and fish.

They are generally good for your tank, but if you want them removed, you can try a bristle worm trap, physically remove them, or add a predator.

Before we look at how bristle worms might impact your tank, let’s first have a better understanding of the animal so that everything we look at later makes sense.

What are Bristle Worms?

Bristle worms are a group of soft-bodied annelids that make up the paraphyletic class Polychaeta.

Annelids, as opposed to nematodes (another type of commonly found worm), have segmented bodies instead of continuously smooth cylindrical bodies. Hence, the common names for annelids and nematodes are segmented worms and roundworms respectively.

Per its namesake, the bristle worm has many bristles covering its body’s sides.

These bristles can either be hollow or barbed, which allows them to break off when in contact with fish or any other animal. Some species may also carry venom in their bristles, which can irritation if touched.

Bristle Worms in the Wild

Bristle worms, which can contain up to 10,000 species, are found in oceans all around the world, along with a few freshwater habitats. They can tolerate almost any marine habitat, from deep hydrothermal vents where temperatures can reach up to 140 degrees Fahrenheit, to coral reefs, to the open ocean.

They have been around on Earth for over 500 million years, and as a result, have evolved in various ways to survive in just about any environment that they’re in.

More information on the diversity of bristle worms in the wild can be found here.

The majority of bristle worms start as drifting eggs and sperm in the water, which then fertilize and eventually form larvae. The larvae change from a free-swimming stage to a segmented stage before maturing to their adult form and later repeat the cycle.

Some bristle worms may reproduce asexually via budding instead of sexually via fertilization.

Adult bristle worms typically don’t take care of their young as they often just release their eggs and sperm into the water, however, a select few are known to care for their young after birth.

Bristle worms are sometimes disliked by aquarium hobbyists due to them being uninvited guests to the tank, and their potential to disrupt life inside the tank. Luckily, there are several fish and invertebrates that are known to prey on these worms.

Here is a list of the animals known to eat bristle worms:

The bolded animals are the ones you’re most likely to see at a pet store.

Be sure to always make sure the predatory animals you introduce are compatible with your tank and its other inhabitants.

What Do Bristle Worms Eat?

Do They Eat Coral?

The majority of bristle worms will not attack or eat healthy coral or animals. If you happen to see any next to your corals, it’s most likely that they’re scavenging for food.

In fact, not only do most bristle worms not eat coral, they’re often considered part of a healthy living reef, the details of which we’ll look at later.

Do They Eat Fish?

Most bristle worms are scavengers that will not eat live animals, including fish. Some have reported seeing bristle worms feeding on dead fish during daylight hours, however, this was most likely because the fish was already dead and had started decaying before the worms got there.

A notable exception is some stinging bristle worm species, such as fireworms. Fireworms are known to consume soft and hard corals, anemones, small crustaceans, and small fish, the latter of which are typically attacked at night when they’re asleep.

How Do Bristle Worms Impact Your Tank?

The majority of bristle worms are found in the ocean, hence you’ll most likely only see them living in a saltwater tank (typically a reef tank) where you have lots of live rocks.

As these worms are nocturnal and often stay under the rocks or in the tank substrate, your best chances of seeing them in your tank are if you’re looking for them at night with a flashlight, or have them exposed by moving a rock or disturbing the substrate.

Here are the ways bristle worms can impact your tank and its inhabitants:

Are Bristle Worms Good or Bad for Your Tank?

Determining whether bristle worms are good or bad depends on the type that you have. As mentioned before, most bristle worms won’t harm your tank or its inhabitants, however, a select few are known to do otherwise.

Usually, bristle worms are hard at work making sure your tank is healthy.

As they are known to consume carrion, bristle worms also help prevent dead animals from rotting and damaging the water quality, especially if your tank setup is a bit complex and you don’t notice the dead animal at first.

When bristle worms consume the waste in your tank, they also help prevent their decomposition and the subsequent production of ammonia, which can add to the load that needs to be processed by your biological filter.

One thing to keep in mind is that, if you know you have bristle worms present, you should consistently monitor how many there are in your tank. You’ll know if something is wrong in your reef tank if there is an excessive abundance of bristle worms.

As mentioned earlier, the majority of bristle worms are good for your tank, however stinging bristle worms, such as the fireworm, are a noticeable exception.

Fireworms are known to damage the reef life present in your tank, and can potentially be a serious health risk to some of your fish.

One particular fireworm species, known as the bearded fireworm, is a carnivore that you would want to avoid in your reef tank as much as possible. The bearded fireworms will attack the healthy fish and coral in your tank, the latter of which is because they feed on the corals and the anemones that can sometimes attach to reefs.

You need to be aware of any stinging bristle worms, such as the bearded fireworm, and, once you notice them, follow the steps we’ll be looking at later to remove them. Luckily, the bearded fireworm is usually easy to spot since it can grow anywhere from 6 to 12 inches in length in a variety of colors.

How to Get Rid of Bristle Worms

Though bristle worms are usually beneficial for your tank, if you happened to come across any bad bristle worms, or you’d rather not have any, follow these methods to remove any worms in your tank.

1. Identifying Any Worms You May Have

Before you go about trying to kill or remove the bristle worms, you’ll want to make sure your tank actually contains them, and also how many you have to ensure you’ve eliminated them all after you’re done.

Though this step may sound rather simple, it can be quite easy to miss them since they’re nocturnal and will usually only come out of their shelter in the substrate or rocks when it’s dark out.

The first thing you’ll want to do when you suspect your tank has bristle worms is to grab a flashlight and turn off all other lights in your tank and room.

The flashlight will need to be using red light since white light tends to scare away the worms. Red light is often more difficult for nocturnal animals, such as bristle worms, to perceive.

The flashlight can either have a red light setting or be covered with red vellum paper or acetate to achieve the same result.

After the lights are off, the worms should begin to emerge from the rocks or beneath the sand. You can also move the sand around using a small net to persuade the worms to come out.

The following steps can be done in any particular order. There’s no need to use any other method if one happens to work.

The first method you can try is to use bristle worm traps. Traps are a great option if you either don’t have the space in your tank to place other fish or you’re on a tight budget.

Here are some traps you can consider, some of which you can make right at home:

Whichever type of trap you decide to use, make sure you leave them in your tank with some kind of bait in it (examples of trap baits are listed in the materials section). Be sure the traps are placed near the areas where you’ve noticed the worms earlier.

Small and fresh, raw, or cooked foods are more likely to attract bristle worms than frozen or large food since these worms are typically quite small themselves.

After the set-up is complete, remember to check the traps after one or two nights. If you haven’t caught anything within 48 hours, replace the bait inside with fresh bait to keep it from decaying and ruining the water.

3. Introduce Natural Predators of Bristle Worms to the Tank

Another option besides using traps is to add a natural predator of the bristle worm to your tank (the exact species we mentioned earlier). Not only will these animals be able to take care of your worm problem, but they can also turn out to be a great addition to your community of saltwater fish.

Though these predators are effective at solving your worm problem, there are some downsides to using them. The main issue most aquarists tend to come across is that, if they’re not careful, these natural predators can not only consume the worms, but also the desirable fish and other organisms you’d like to keep in your tank.

4. Retrieve the Worms Yourself

The last option to remove bristle worms from your tank is to take a pair of gloves, tweezers, and nets, and go pick out the worms one by one. Make sure to put on your rubber gloves (to avoid contact with the potentially stinging toxic bristles), then remove the worms when you see them using a pair of tweezers or a net.

It’s important to be very careful when picking up the worms, as they are very fragile and can break easily. Breaking it can allow the pieces to regenerate into a whole new worm, so it’s crucial to avoid that.

Another way of removing the bristle worms manually is by taking the live rocks you know contain the worms and dipping the rocks in a bucket of dechlorinated water. The worms will be repelled by the water and will pour out of the rock and into the bottom of the bucket themselves.

Read More: What Are Water Mites?

We’ve gone over a lot of material in this article, but in the end, just remember that, despite appearances, the majority of bristle worms are beneficial for your reef tank. But if, for some reason, you decide not to have any in your tank, don’t fret as there are many ways to get the job done.